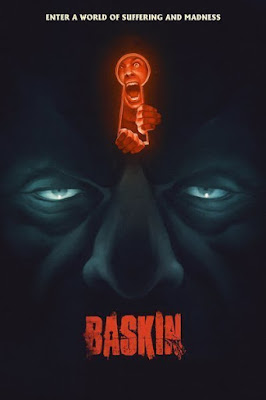 Bathed in beautiful blues and reds, with an often pounding heartbeat of a soundtrack, Baskin is a nightmarish 1hr37min. You may well breathe a sigh of relief once it's done.

Directed by Can Evrenol as his first feature, this is the long-form version of his short film of the same name, describing the same events. Here's the Netflix blurb:


"A group of tough Turkish lawmen answer a call from a remote town and stumble into a gory Black Mass that appears to be occurring literally in Hell."

The intensity of that is well-deserved. As they venture further down into the darkness of the sub-levels of an abandoned building, these cops discover rooms of abhorrent acts, torture, mutilation, and satanic rituals. 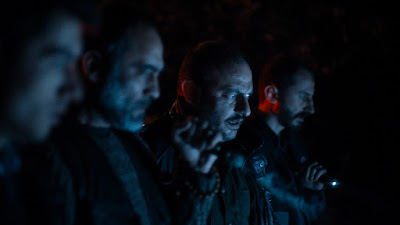 Time for these men skips and loops, too, so along with some mind-bending and batshit encounters, we're forced to question too what is real, or what is happening when.

Initially with only their torchlight to guide them, we see slices of horrors before being able to take in the full tableau. Catching glimpses of incredibly fucked up shit is arguably worse, because your brain fills in the gaps.

And then comes the point where you're able to see everything that's happening, and you wish for the darkness and ignorance again.


Some horror films become more than simply "horrific"; those that use their imagery in such a way that it becomes a deeper level of offensive or taboo-breaking. Not just the subject matter, but the way it's presented. I found Baskin to be such a film. I'm not in the least bit religious, but there were things in this that disturbed me more than normal horror fare. The vibe of this film is evil. Its intensity and the blood-drenched, religious forward-motion of the characters reminded me of Martyrs (a film I like, but have never been able to watch more than once).

It's an understatement to say that Baskin is not for the squeamish, or the easily shocked. It's beautiful to look at, but what you are looking at is... well, deeply fucked up, a lot of the time! This is a serial killer's fever dream.

Streaming on Netflix at time of writing...
Posted by Zombie Cupcake at 16:26