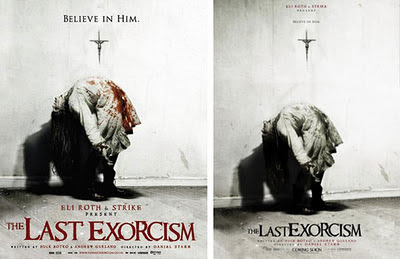 
I normally eat up found footage horror. Even when others whine that it's just another variation on the The Blair Witch Project (putting aside for the moment that The Last Broadcast went there a year before the Witch did) I'm the one who still gets terrified by this stuff, because it seems so much more real. I don't know that this sub-genre breaks the fourth wall exactly, but it presses more firmly against it that any of the others. Therefore, it makes sense that where horror is concerned, it can lead to some frightening results.

The thing is, for disbelief to be fully and successfully suspended, the viewer really needs to be in the cinema, or at least ensconced in a dark room with no other distractions.

The problems I found with The Last Exorcism, despite some very creepy, very tense moments, were that (a) I wasn't in a cinema (not the film's fault, of course) but had I been, dear reader, I probably would have shat my pants, and (b) Even I could see the stain of Blair Witch all over this one - at the very end especially.

Could have done without Eli Roth's pointless "introduction", too. However I did choose it from the DVD menu, so I suppose I best take responsibility for that as well. Silly old me thought it might be something interesting or relevant to guide us into the story, not a big smug face basically stating "Hi. Here's the film". Cheers Roth, never would have made it to the opening credits without you.

All this said, The Last Exorcism stands up, albeit shakily and with a right crick in its neck. If you're partial to faux documentaries, naturalistic (sometimes naturally double-jointed) acting and shaky camera-work, you could do a lot worse than to spend 87min in the company of this one.
Posted by Zombie Cupcake at 18:14 5 comments: