Have I ever mentioned that I find the opening titles to Masters of Horror gives me the willies more than any of the actual episodes I've seen?


There's just something about them that spooks me.

Unfortunately from my experience, the features themselves never come close to this creepiness.


Does anyone have a MoH episode they enjoyed enough to recommend? I used to own this but none of those movies did anything for me at all. Granted, I'm basing my opinions on that boxset and one other episode alone, but I'm starting to wonder if it's worth continuing dredging through hours of shit in the hope of finding a hint of gold.

What may have tipped me over the edge was The Washingtonians. Jesus H Christ it was bad. 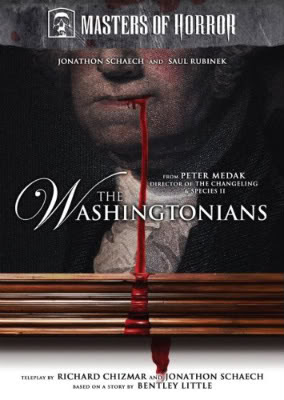 Why are they all varying shades of bad? Is there any reason as to why the episodes aren't genuinely chilling? There were certainly enough impressive names to put some weight behind this, why was the end product so thoroughly mediocre?

Scratching around for an answer, I wondered if it might be a case of the laws of TV being somehow restricting to the material. A little sniffing around revealed that the show was broadcast on Showtime, on a Friday night at 10pm (EST). According to IMDb its certification was"TV-MA"


Mature Audience Only
This program is specifically designed to be viewed by adults and therefore may be unsuitable for children under 17. This program contains one or more of the following: graphic violence (V), explicit sexual activity (S), or crude indecent language (L).

So it's certainly not a matter of not being given enough "freedom" to make a decent story. Made-for-TV horror doesn't have to suck. It is possible to do, and do well.

We're talking basic genre knowledge here. A lot of the episodes I've seen are pretty gore-filled, but that alone does not a great horror yarn make.

Am I being too harsh? Would seeking out more of these lead to further disappointment? Advice and recommendations welcome.
Posted by Zombie Cupcake at 08:30 5 comments: