Was Dead and Buried adapted from a short story? It certainly plays out like it. Despite being a slow burner it is incredibly well paced, with nothing extraneous added at all.

The plot is one we are used to: a lone person in a community feels something is amiss and sets about trying to investigate it, only for everyone to doubt and dismiss him and his "crazy ideas". Is he insane? Is everyone else insane? Could his schoolteacher wife (the gorgeous Melody Anderson) possibly have anything to do with all of this? 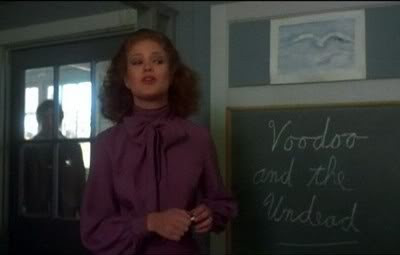 The character who is doing a lot of running around and confused face rubbing is Sheriff Dan Gillis (James Farentino). 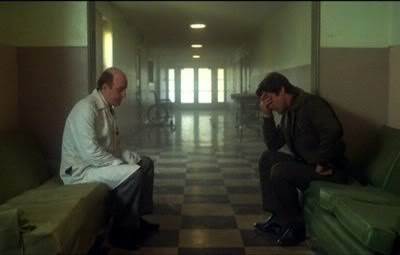 We follow him from one gruesome murder scene to another in the previously sleepy town of Potters Bluff (one minor complaint is why the Sheriff has only just noticed all the weirdness, considering it seems to have been going on for some time with him living there). In any case, we watch as he learns more and more startling things about certain townsfolk.

It's a tightly plotted tale, and it builds nicely until the final act when Sheriff Gillis finally learns the whole macabre truth. The film ends on his screaming.

Though not a "shocker" by any means this film grew on me the more I thought about it. Given that it is 28 years old (it was released the year I was born, aww) it doesn't show its age as much as many films of that era. This is mostly due to the fact that Potters Bluff seems stuck in a bit of a time warp itself; the local waitress has a 1940s hairstyle and the town mortician listens to big band music while he works. This all sounds very twee, but it gives the film an air of the unreal and makes it even spookier. We aren't distracted by bad 80s hair and stone washed jeans here - we're just creeped out by how strangely placid everyone is and, if I'm honest, by the sight of a young Robert Englund. 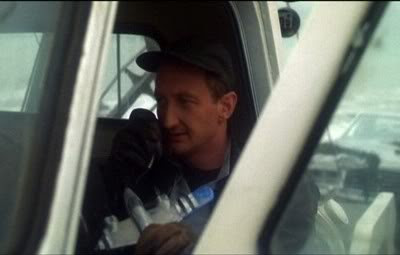 The two best things about this film are a) the growing sense of dread as the Sheriff is given reasons to suspect that his town is seriously fucked up, and b) Stan Winston's special effects.

In fact, Stan Winston blew me away. Again. But in a totally different way to how his work on Pumpkinhead did. Listen, I know I may not be the sharpest knife in the drawer, but it took the trivia section on IMDb to tell me that someone I assumed to be an actor in one scene, was in actual fact a life size animatronic creation of Winston's. Amazing. I mean, the guy is a burns victim in a full body cast, so you expect him to be moving a little awkwardly... but this thing is just so intensely creepy. Winston you genius-like bastard. 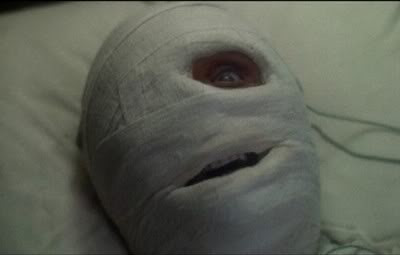 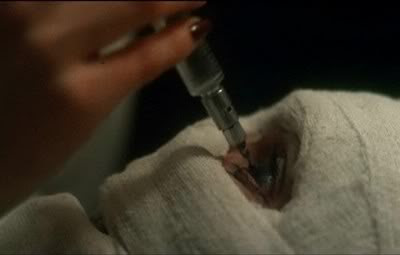 Culling the trivia page again, I just have to mention my relief at learning that the one really lame effect in this movie was nothing to do with Winston.

It involves a doctor being killed by acid being pumped into his head (heh, cool) and the resulting mess is... well, a mess. 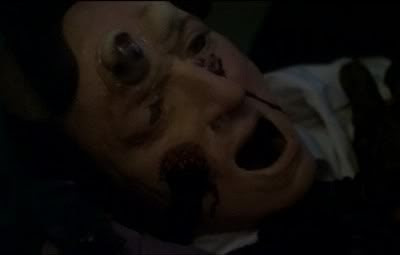 Horrible in that it's a big screaming rubber face - but not at all realistic, I think you'll agree.


...but they could not get Winston back to off the doctor, so another FX team was used on that one sub-par effect.


The effects team who created the "dissolving head" for Doc's murder mentioned in an interview that the director had originally told them that he wanted to do the scene in one unbroken shot, meaning they had to build a head that was both convincing and also would "melt" the way they wanted it to. They lamented the fact that, while they did the best they could with what they had, the director ended up using a cutaway shot anyway, which would have given them the opportunity to make the scene much more realistic.

I don't know who I feel more sorry for; Winston for not getting to play with a liquefying head, or the poor saps who had to stand in for such a talent for one literally lousy effect.

But no matter, what Winston does do, he does spectacularly. There is one scene where Dobbs, the mortician, is shown to slowly rebuild a murdered hitchhiker's smashed in head. I have to wonder if the hands featured in it are actually Winston's. 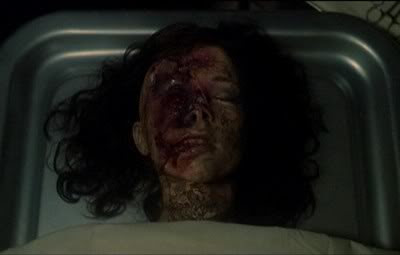 It is a beautifully creepy montage, actually very representative of the film as a whole in its stillness and uncomfortable, under-your-skin type of horror.

This isn't a film to put the fear of god into you - but in a way it is much worse. It stays with you and the next time you enter a dimly lit room, or see someone approaching in the street at dusk, your mind flits back to Potters Bluff and its terrible secrets. That type of horror is far scarier than cheap jump-scares. This little gem will have you thinking about it as you wait for sleep to come. Good stuff.
Posted by Zombie Cupcake at 06:24 No comments: