During October I joined in with a '31 days of horror' event, posting a picture every day in answer to a question related to the genre. I thought it might be cool to post them here, too... 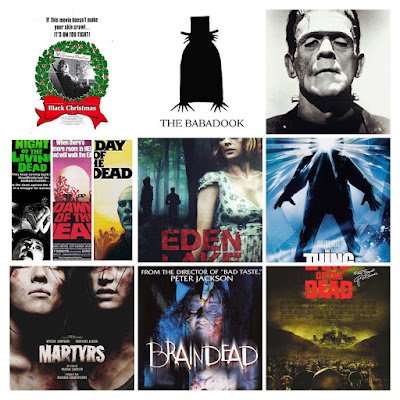 1. Your first horror movie: I'm too old to remember my first. But here's one of my firsts, and recommended by my dad, so holds a special place in my heart. It's now a Christmas tradition to watch it!
2. Last horror movie you watched: Just finished it and now writing a review!
3. Favourite Universal Monster: Frankenstein's monster! I love the grisly beginnings and the tragedy of the tale. Classic.
4. Favourite horror franchise: Despite the later ones from Romero zombie canon not being... great (I don't think I've even seen Survival) that *still* doesn't take away how immense this "holy trinity" is. As a zombie fan, I have to say the ...of the Dead franchise.
5. Best ending in a horror film: This kind of question drives me crazy, but in general I like my horror to end on a massive fucking downer. The kind that hollows you out while the credits roll and it all sinks in. So, Eden Lake.
6. Favourite horror remake: You gotta be fucking kidding!
7. Most disturbing horror film: That I've seen? Probably Martyrs. And I think "disturbing" does it a disservice somewhat, as it's a powerful film with some really interesting themes. But I did also find it almost unbearably tense and brutal.
8. Horror film that needs a reboot: I've never actually made it all the way through Braindead. Maybe if they made a new one I would??
9. Most anticipated horror film: I took a day off work and baked brain cupcakes for the cinema for this one. Romero's first zombie film since Day?! SUCH anticipation. And it was... okay. I'm probably due a rewatch. But getting so excited was fun. 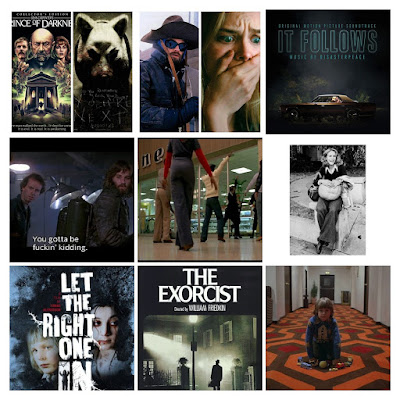 10. Favourite horror director: I chose two, just because. John Carpenter for his undeniable classics and contribution to the genre. Adam Wingard for what I've seen so far, and hope to see more of.
11. Favourite horror character: I'm going with my gut, the first ones I thought of were MacReady from The Thing and Dawn from Teeth.
12. Favourite horror soundtrack: It Follows.
13. Best line in a horror movie: See above. It's EXACTLY what you'd say in that moment. Perfect.
14. Favourite zombie film: Dawn of the Dead (1978). A classic. Every time I rewatch to check I still love it as much, I definitely do.
15. Favourite scream queen: Always and forever, Jamie Lee Curtis.
16. Favourite foreign horror: So many to choose from! I'll settle for this one. Beautiful as well as bloody, a combo I really enjoy when it's done well.
17. Best 70s horror film: The Exorcist. An absolute classic.
18. Best 80s horror film: Best decade ever for horror you mean? I'm absolutely spoilt for choice here. But The Shining swung it just because the first time I saw it I had to turn it off, I was so scared. Honourable mentions to The Thing and Dead & Buried! 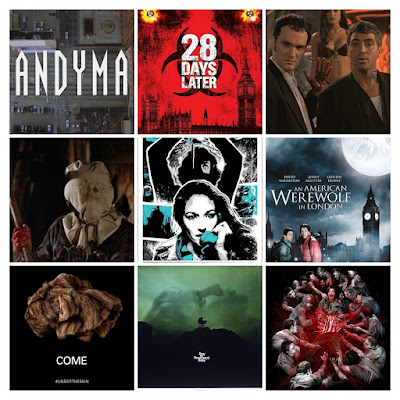 19. Best 90s horror film: Candyman! From that chilling opening crawl onwards, this film is one of my very favourites. Honourable mentions to The Blair Witch Project, Tremors and Se7en! The 90s really weren't so bad!
20. Best 00's horror film: I have to pick 28 Days Later. I went to see this on my own at night and came out of the cinema shaking. It's one of the best "horror in the cinema" experiences I've had. Intense, very English, and unapologetic. It's a fucking great film.
21. (there was no 21!)
22. Best vampire film: From Dusk Till Dawn. I loved this the moment I first saw it. Gore, girls, comedy, horror, a Tom Savini cameo...!
23. Best sequel in horror: Friday the 13th Part 2. It's all about the pillowcase. Way more scary than the hockey mask.
24. Best slasher film: I'm cycling back to Black Christmas. It's just so good! Also this artwork is great.
25. Best werewolf film: Could I choose any other? An American Werewolf In London. This film is as old as I am, and the effects are still pretty much everyone's favourite transformation.
26. Best sci-fi horror: Under The Skin stayed with me for many days after watching it. Weird, sensual, sinister and heartbreaking.
27. Best satanic film: Rosemary's Baby may have been one of the first horror films I saw, and probably one of the first that made me realise there didn't immediately need to be buckets of blood flying everywhere to be genuinely chilling. I also have a vague recollection of my dad telling me to watch it, so that's also a good thing!
28. Best death scene: "CHOKE ON 'EM!!!". 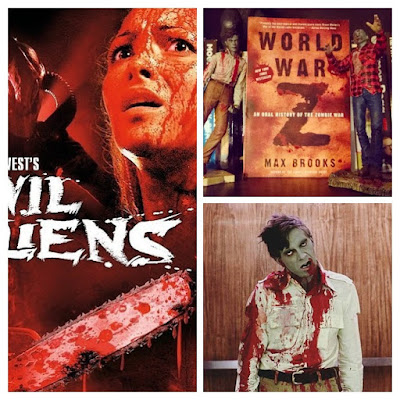 29. Worst horror movie: I've watched some right old shit in my time, but this was one of the hardest to get through. It's effing terrible. That artwork should have been a hint.
30. Your horror collection: It's spread across shelves, wallets, hard drives, books, action figures and 2 countries. There's no way I can get a pic. So have this as a representation
31. Favourite horror film: This is another kind of impossible question for me. There are so many different ones that satisfy different moods. If I HAD to pick, then Dawn of the Dead. But my favourite ever film is Jaws, and that's considered horror, too. Then there's Blair Witch, that gave me my first genuinely terrified cinema experience. So many!
Posted by Zombie Cupcake at 22:33 No comments: