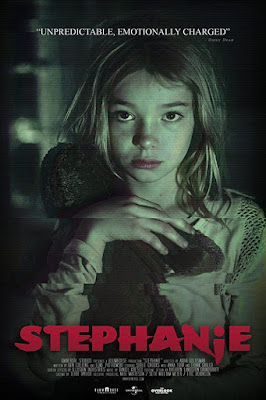 This was an interesting one.

We're plonked down seemingly in the middle of Stephanie's story (an impressive performance from young Shree Crooks). Alone in her house and looking after herself while doing perilous things that made even a child-free person like myself wince, she talks to her cuddly turtle as if he were real, but there is clearly another entity here, too. Stephanie doesn't seem shocked about this. Scared, certainly, but not surprised. She goes about her day as normally as possible, reveling in her parent-less existence and also weeping for them to come home, occasionally hiding from a "monster" we only hear as it prowls around the little girl. 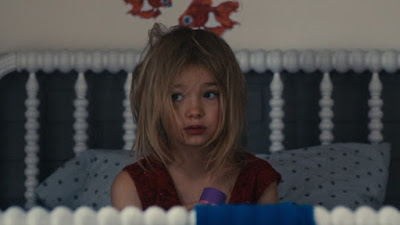 Before the story develops fully, there is a palpable sense of this being a traumatic experience told through the lens of a child's understanding and processing of something they can't quite grasp. This is one of the film's strengths, I think. It felt almost storybook at times.

Stephanie's parents (Frank Grillo and Anna Torv, freaking me out with her long, non-Mindhunter hair) seem confused and cagey around their daughter. There's a lot of talk about keeping calm. Stephanie's father is tender towards the girl; her mother less so. She's affectionate but guarded, often retreating a room of medical diagrams and Skyping with army officers. What on earth is going on? 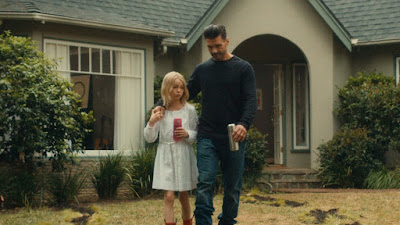 The reveal did not come as a complete shock, to be honest. But it wasn't entirely evident, and it didn't lessen my enjoyment of the movie even so. This is a cool little story that successfully manages to convey a sense of fear and paranoia after a global crisis all while rarely leaving the upper middle class, suburban house. That the narrative ultimately pulls back so far as to leave the planet was... a choice, certainly. It's clear what they intended this to mean but I'm undecided as to how I felt about it after everything being so personal up to that point. Still, I enjoyed my time with Stephanie.

This is a Blumhouse Productions movie, directed by Akiva Goldsman and coming in at a very doable 86mins of runtime. It's streaming on Netflix at time of writing.
Posted by Zombie Cupcake at 19:09 No comments: