As a horror fan I have made my peace with the fact that I am too young to have experienced a lot of the "classics" when they were first released (just call me a late bloomer. Hell, I am only now working my way through the Friday The 13th and Nightmare On Elm Street franchises). This said, it still leaves me more than a little sad when I only really start to appreciate something due to the death of who created it.

I knew the name Stan Winston, but I never really knew the extent of the man's work until I read that he had passed away earlier this year. I started looking into just what he had been involved with, and my jaw dropped. I have a relatively new fascination with make up and special effects, work but it's a fascination all the same and MY GOD was Winston talented. Particularly considering that we have now entered an age where it is cheaper (I presume?) and easier to make an effect using wholly CGI work. It is fine and everything... but just like vinyl versus CD, something is lost. A little bit of heart gets left behind when prosthetics, latex and hard graft are replaced with a shiny computer composite. It just ends up seeming colder.

All this is basically just a lead up to saying that I rented Pumpkinhead (1989) the other day. 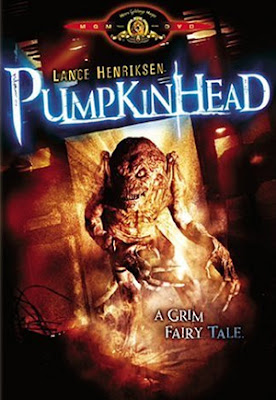 Keep away from Pumpkinhead,
Unless you're tired of living,
His enemies are mostly dead,
He's mean and unforgiving,
Laugh at him and you're undone,
But in some dreadful fashion,
Vengeance, he considers fun,
And plans it with a passion,
Time will not erase or blot,
A plot that he has brewing,
It's when you think that he's forgot,
He'll conjure your undoing,
Bolted doors and windows barred,
Guard dogs prowling in the yard,
Won't protect you in your bed,
Nothing will, from Pumpkinhead.


I am pretty sure I always assumed the demon actually had a pumpkin for a head, so it was a bit of a shock to see that the thing was pretty scary looking in an Alien kind of way. The fact we often see it in a full length shot of its body is also very cool. Yes, it goes against "first rule of monster films: never show the monster", but this one was directed by a special effects genius, so we can allow him some showcasing, by all means - at least we know that what we are going to see is going to impress.

The plot concerns a countryside-dwelling single father, Ed (Lance Henriksen) seeking vengeance for the killing of his son. The little boy gets mown down and left for dead by a dirt bike riding utter arsehole by the name of Joel (as he's speeding along in his sports car in his establishing scene, he tells his accompanying girlfriend to hand him a beer. Oh yeah). I had to look up who played this guy: his name is John D'Aquino and I used to have a crush on him in my teens when he was in seaQuest DSV! As well as Jonathan Brandis - but I digress.

Wracked with pain at his son's death, Ed seeks out an old hag in some spooky woods. She lives in a cabin full of animals and sits in front of the fire all day. She's my hero. Anyway, she brings about the rising of a vengeance demon who goes by the name of Pumpkinhead. 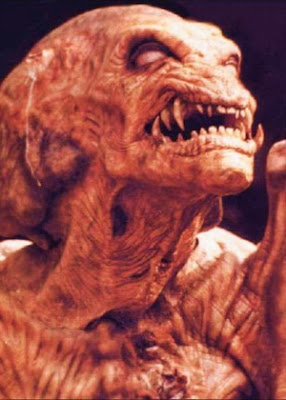 Ed soon regrets his decision however, when the demon starts slaying this Joel fellow and his assorted city folk friends - one of whom was so the Final Girl she practically wore a T-shirt with it printed on (hmm, I want one of those).
Due to the nature of the ritual which brought about its rising, Ed is connected to the demon and its exploits, and finds himself unable to go about grieving for his son in peace - instead deciding to help the teens to stop the bloody rampage...

One of the things that struck me about this film was the lighting, as it is often amazingly effective. It is seen rather unnaturally pouring in great shards from windows and doorways, but it works. Outside is cold and tinged blue; inside is lit by flickering candlelight and is almost cosy - even though the characters are rarely doing anything other than cowering in fear. There is a lot of dry ice, a lot of back-lighting and a lot of shadow, but this just serves to make the already freaky tale seem even more surreal and otherworldly. 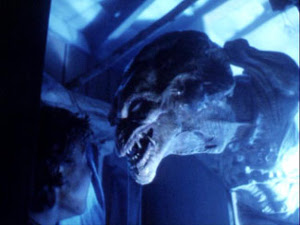 Pumpkinhead himself? There are no words really. That creation is truly a thing of beauty. The way it moves (the ease at which it seems to be able to, more specifically), the detail and the imagination behind it are all simply wonderful. I kind of ended up feeling a bit sorry for old 'head to be honest. I mean, he was just trying to do his job. We aren't given long enough with the annoying city kids to bother caring about them, so to be honest you find yourself rooting for the demon who simply wants to put in his hours before heading back to the pumpkin patch (a GREAT set by the way) for another snooze before he's needed again. Joel and his friends did, in essence, kill the little boy. They bloody well deserve to be held aloft by a great big demon with a fantastically creepy gait.

The ending suits the nature of the film extremely well, playing more like the continuation of the fable rather than a groan inducing set up for a sequel.

Good on you Stan. Please accept my apologies for the posthumous appreciation, however heartfelt! 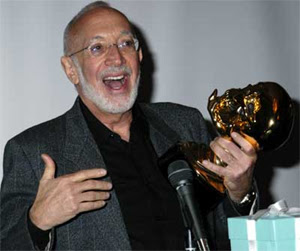 
I look forward to watching and re-watching all of your incredible work.
Posted by Zombie Cupcake at 15:47 No comments: