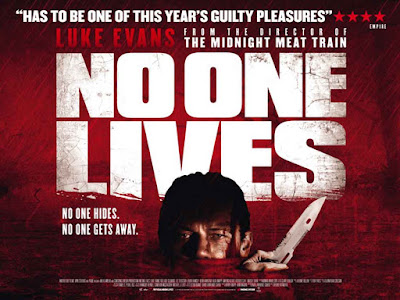 From director Ryûhei Kitamura (Midnight Meat Train), No One Lives is a nonsensical, nasty little WWE production that has everything you'd expect from such (truly terrible dialogue, fight scenes involving a lot of throwing, tits) and it may have solidified my aversion to the output of this studio. I've now seen this and See No Evil, which was similarly just about okay.

Um... and the killer totally lets someone live at the end, so the title is a big fat lie.
Posted by Zombie Cupcake at 18:53 No comments: 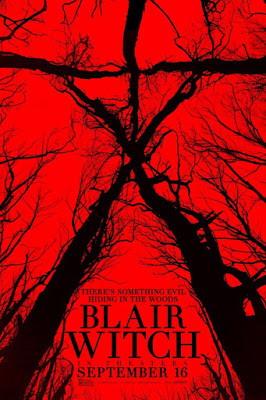 Google this film and you'll be met with a smorgasbord of rating aggregate sites, all basically giving it a huge thumbs down. And no, it's not perfect, but I think Blair Witch has been given a rougher deal than it really deserves.

Of course, it was always going to be impossible to match The Blair Witch Project in terms of audience reception and cultural reaction. By no means the first found footage horror film (for that we could go all the way back to Cannibal Holocaust, and arguably further. Plus I'll always mention that The Last Broadcast came out a year before The Blair Witch Project did) it was a movie in the right place at the right time, breaking out into the mainstream and grossing nearly $250 million from a budget of just $60,000. Whatever your opinion of The Blair Witch Project, you have to admit it was a milestone in horror history.

So with that, despite this being another Wingard and Barrett dream team effort (like A Horrible Way To Die, You're Next, The Guest), this sequel is just "good" rather than "great".

The plot is simple: James (James Allen McCune) is the brother of Heather (Heather Donahue) from the original film, and has understandably never got over her mysterious and violent disappearance. After discovering previously unseen footage depicting (he thinks) Heather inside the same creepy AF house from the climax of The Blair Witch Project, he gathers a group of friends and locals to venture into the woods to investigate, so they can figure out once and for all what the hell is going on. 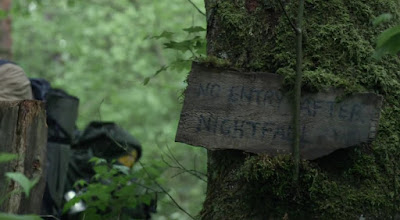 The gearing up sequences are a necessary but annoying start to the tale. Yes, it makes total sense to introduce newer technology, as the events shown here are meant to have taken place in 2014. So as well as the updated camcorder, we have a quadcopter/drone (I still can't decide if it was underused or used just enough) and the biggest cam contrivance: "earpiece cams". Even though they look like a bluetooth headset, these cameras seem to be able to film a full POV from the wearer...? There's also numerous mentions of SD cards and battery life, but ultimately none of that becomes relevant - so why bother mentioning it?

Of course, it makes sense why we have all this techy exposition up front. It's part and parcel of found footage, just like the "oh no, I lost cell service!" moment in modern horrors; we have to have an excuse for all the different camera angles. It's just my least favourite moment in any of these films, because it rarely plays as anything but clunky.

Where the original was an exercise in long form improv, this was fully scripted, and the cast do a good job with what is essentially a lot of shouting and whimpering (there's even a small homage to Heather's to-camera crying moment). Callie Hernandez as Lisa has the most to do, and commits fully and convincingly, especially during an intensely claustrophobic sequence in the third act. 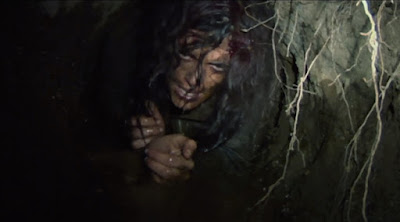 I'm interested to see more of her - and excited to see that she stars in The Endless, a movie I've been looking forward to for a while now.

Something unexpected was how reminiscent I found this to be of The Ritual. The nighttime sounds of the first film having evolved from children's voices and twigs snapping, to the screams of wolves and entire trees being torn down. The sound of something so massive out there in the dark made me think of The Ritual (*spoiler*! -->) and an immense old god lumbering around picking off unfortunate human visitors. I'd like to think maybe the witch has grown so powerful in the 20 years that this is kind of the case? 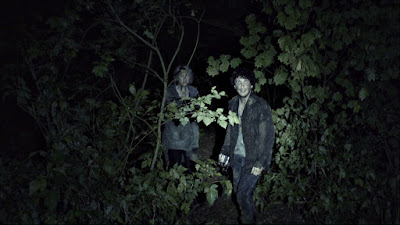 My one main problem with this movie comes at the very end. By now we all know that it's 'decent horror 101' not to show the monster - or at least not too much of it. However the glimpses we get of the "entity" here are way too lingering. This choice from these horror minds is surprising, and as horrible as the fiend may ever be to look at, some of the fear always drops off once you see it.

Despite this, Blair Witch is a competent handling of the evolution of the story, even if it rarely shows the finesse and imagination that we have come to expect from Wingard and Barrett. It still made me bring my knees up and pull up a blanket, ready to hide behind, and that sense of tension and unknown terror is such an important part of the Blair Witch story. Being lost in the woods at night is scary on a primal level, and these moments, though they mostly entail running, screaming and yelling, are satisfying to experience - even if they aren't anything particularly new.

A Wingard/Barrett 1.5 is still a strong 3 in the grand scheme of things! Speaking as someone who was properly obsessed with the original, this is decent follow-up, certainly making me re-live some of those feelings from '99! On Hulu at time of writing... I'd recommend it with the lights down and something to hide behind.
Posted by Zombie Cupcake at 21:08 No comments: 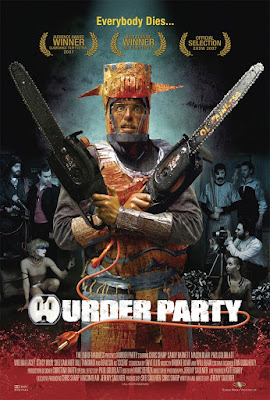 Murder Party is the directorial debut of Jeremy Saulnier, the same name who brought us the fantastic Blue Ruin and Green Room. Some of the cast from those films also feature here, too.

Written by Saulnier also, this is a no-budget, all heart, black comedy horror which came as a really refreshing watch after a few false starts for me lately (I tried to make it through Don't Go In The Woods, I really did, but it was SO bad).

Chris (Chris Sharp) is a normal-bordering-on-boring guy whose Halloween plans involve renting some horror VHS tapes and sitting with his cat with some candy corn. On his way home that evening however, he finds an invite to a "Murder Party" and on a whim, decides to attend. He makes some pumpkin bread (and an impressive costume out of cardboard and duct tape) and heads out. 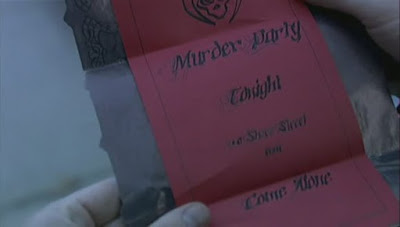 Once there, he soon realises the people throwing the party are a bunch of hipster wanker artist types, and the invite was part of a project they're working on. Even worse, the murder in question is real, and it's him they plan to kill.

Tied up and held hostage in a warehouse, Chris witnesses the group interact, with all their quirks and odd dynamics on display (unrequited love, unabashed drug use, ego, sex...). For a lot of this movie it's a one location, almost stage-play-like deal, following the Steadicam as it travels around, settling on each character as we learn a little about them. They are an unlikeable group really, but they are also such fuck-ups that it's funny to watch this ridiculous, cruel, and largely unplanned "project" of theirs play out and start to crumble down around them.

Drunk, lovestruck Macon is played by Blue Ruin lead Macon Blair (most characters are named after their actor) and is a standout amongst the group, particularly in the final act. Similarly, Chris Sharp spins screentime gold with his role, and his talent for comedy is very obvious. He strikes an absolutely perfect pitch of naive nerd in an unbelievable situation. 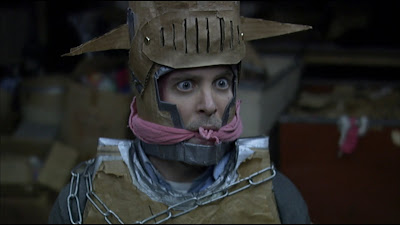 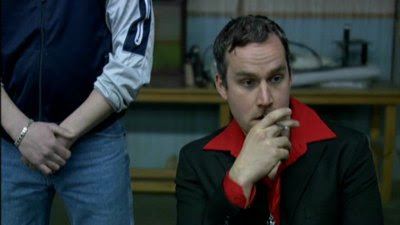 The love-to-hate character here has to be Alexander (Sandy Barnett), a stupendously smarmy, manipulative arsehole and the leader of the group. Barnett excels, because I absolutely hated this guy!

As the tension and antics within the warehouse increase, the third act sees complete mayhem ensue, including a rooftop chase - both characters still in costume - and the relatively gore free nature of the film up to this point, going right out the window. 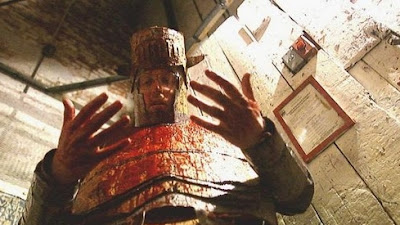 As much as I'm done with railing against remakes and re-tellings, it does seem regrettably seldom that I'm left reflecting on the originality of a horror film as the credits roll. Murder Party for sure provoked this response, and has definitely made me realise that I need to add Jeremy Saulnier to my list of names to look for and follow.

Fun, funny, cute and gory. This is streaming on Shudder at time of writing!
Posted by Zombie Cupcake at 20:30 No comments:

Killing Ground is an Australian Eden Lake, only with some timeline quirks, rape, baby violence, and a dog that actually survives (as far as we know).

To be honest I'm currently experiencing some fatigue from depictions of rape on screen. The moment I realised just how toxic the toxic males in this film were, it was downhill from there. Once that veil drops, that switch goes in their eyes (and credit to the actor Aaron Glenane for portraying this so well here) that's it, we know what comes next.

It's hard watching women sexually brutalised over and over, y'know? No matter how well it's done, no matter if the story sees the survivor exact revenge. It's still a narrative choice that depresses and drains. I wouldn't have knowingly chosen a "rape film" the night I watched this, and yet there I was, again, watching one.

So... I'm sorry, I'm tired. This is going to be a quick/lazy review. Here, have a look at some of the different artwork used for this movie... 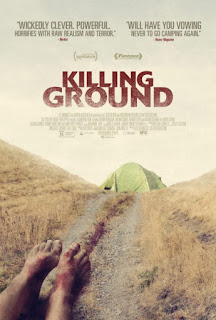 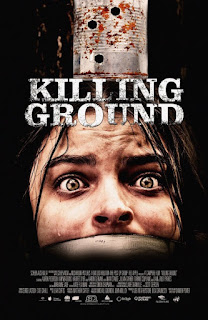 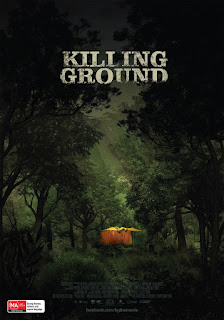 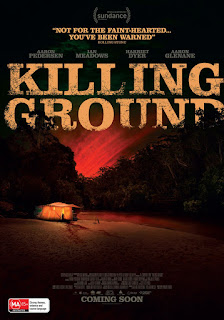 I'll admit that first image was the one I saw and that's mostly why I gave this a chance. As these images suggest, Killing Ground is a nasty, competently-told tale of really awful shit happening on a camping trip.

It's written and directed by Damien Power and it's streaming on Netflix now.
Posted by Zombie Cupcake at 16:57 No comments: