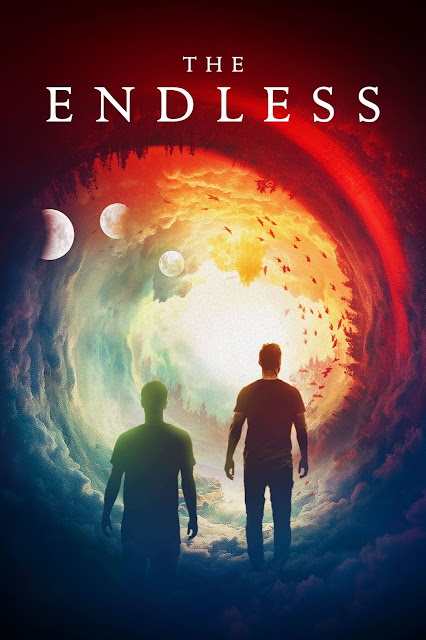 I was THRILLED to see this one drop on Netflix recently.

It's absolutely apparent that The Endless comes from the same hearts, minds, and imaginations as Spring. This is another beautiful, thoughtful, funny horror from Moorhead and Benson, and I really loved it!

It feels very shared universe (more on that later), displaying the same over-saturated, dusty, dreamy quality as their 2014 effort. There's also a similar feeling of this dream-like existence being on the cusp of something immense and threatening.

The Endless is a story of two brothers (played with warmth and humour by Benson and Moorhead themselves) visiting the supposed cult they grew up in, after several years trying to have normal lives out in the real world.

What is initially planned to be fleeting visit leads to some shocking discoveries once back within the folds of this group.


The "cult" members all seem perfectly nice, if a little weird; the oddness and inexplicable occurrences at their camp becoming more frequent and unsettling with a steady pace. From the get-go we know something is wrong, but Moorhead & Benson take their time giving the audience a breadcrumb trail of glimpses and moments as we discover the unbelievable truth along with the brothers.

It feels at once a cop-out and a courtesy to anyone interested in seeing this to speak as little as possible about its major plot points or themes, other than saying I was surprised how much heart it had, ultimately. And like Spring, they struck a beautiful balance here, making this tale at once so intimate and so astronomical.

So yes, if you liked Spring, definitely see this. If you haven't seen Spring then I heartily recommend both! I am really enjoying the work from this team and I must seek out their first film, Resolution, which somehow I'd missed. There is a very definite crossover narrative from that debut to The Endless, but the filmmakers themselves say you don't have to have seen either to enjoy both.

If you have seen The Endless already, may I recommend this podcast episode from The Evolution of Horror, talking to Benson and Moorhead themselves? They seem like such nice blokes, and they have some very interesting and entertaining stuff to say!
Posted by Zombie Cupcake at 17:13 No comments:

This year's list! I started not knowing what to add to it, and have ended it with a tonne of extra choices. As ever, I'll no doubt shuffle, replace and update as mood and availability allow - and I'll attempt to review most of them throughout the month 💀

I think it's a nice mix of films I'm curious/actively excited about, ones that have languished on my list forever, and classics...


Substitute bench:
Halloween II (2009)
Digging Up The Marrow
Beyond The Black Rainbow
The First Purge
Little Deaths
The Interior
The Wailing
Ravenous (Les affamés) (2017)
Cargo
Prom Night
The Last Will and Testament of Rosalind Leigh
Critters
The Eyes Of My Mother
Excision
Splinter
Terrifier
The VVitch
Dawn of the Dead / Day of the Dead
Horror/horror movie themed documentaries (suggestions welcome) 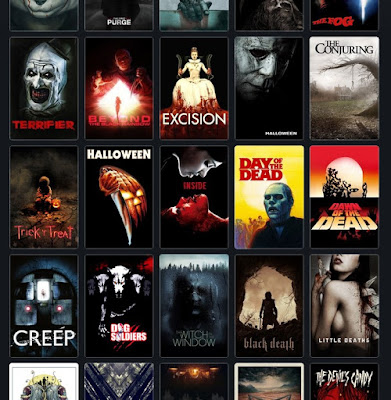 If you're on Letterboxd, then you can see the pretty but-not-ordered version (and feel free to add me on there, too!) - letterboxd.com/relaxcupcake/watchlist

Roll on October!
Posted by Zombie Cupcake at 16:59 2 comments:

Okay, I think I finally realised something. It's taken my entire history of watching horror movies for this to click, which is kind of embarrassing, but I think I just figured out that my approach to slasher films has been all wrong.

So my main complaint with a lot of these movies always seems to be the interminable downtime between the kills. For me to really enjoy a slasher film, there has to be something interesting happening to bridge the gaps between the blood being spilled. It doesn't have to be Citizen Kane over here, it just needs to hold my attention and, ideally, lay the groundwork for actually giving a shit about who survives and who doesn't. I don't necessarily mind a conveyor belt of victims steadily making their way toward death; I just want to care, just a little bit! 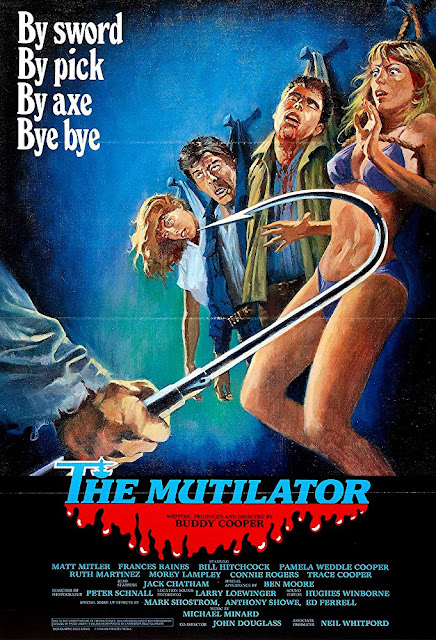 The Mutilator (original title: Fall Break) is a perfect example of the giddy highs and woefully bad lows of films like this.

Written and directed by first-timer Buddy Cooper - a film reviewer for a newspaper who wanted to make movies, so he did. I have to respect that! - this is part of what must have been a bloody cascade of films made after the success of Friday the 13th in 1980. In it, we see a group of college kids staying in a beach house and being murdered using a different weapon each time (hence that awesome tagline). 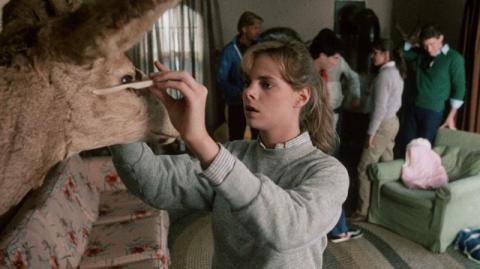 And the gore, courtesy of SFX man Mark Shostrom (Videodrome, A Nightmare on Elm Street 3: Dream Warriors, Evil Dead II, a couple of Phantasms) is really good, but the price of admission for it is TERRIBLE dialogue, DELIVERED TERRIBLY for extended amounts of time. 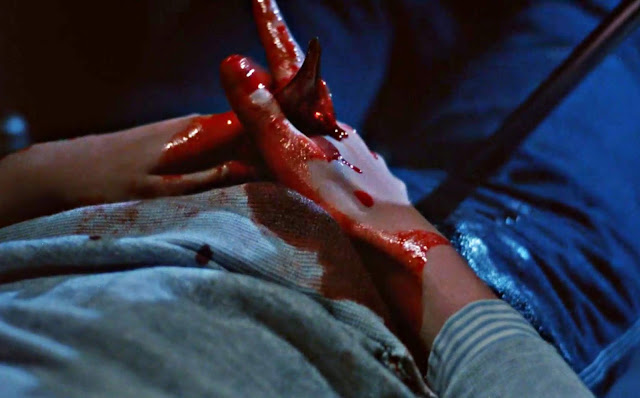 At one point, we follow the worst character in the entire film (the "joker" of the friend group 😐) for fucking ages as he walks around looking for his mates. He cracks jokes and does voices and funny walks to no one in particular for soooo looooong until he's finally killed. There's no tension here at all, and just like in The Prowler, it gets boring and frustrating waiting through these slumps.

I found myself wishing I were a) more drunk, b) with a group of friends, or c) drunk with a group of friends. And that's when I realised that my sitting alone or with my husband just chilling and watching this stuff isn't how it was originally meant to be consumed. Stuff like this was meant to be drive-in fodder; where you're laughing and goofing around with friends and/or making out while the movie is playing. That's what passes the time while you're waiting for fucking Ralph to die. You're meant to be throwing popcorn, cracking open another beer or making snide comments - that's what makes this stuff bearable.

So, mental note for the next 80s stalk and slash that I suspect might be like this: cheap beer, funny friends are essential.

Unless you're coming to it armed with the above, I'd say The Mutilator is a "fast forward between the kills" kind of situation, as everything else is painful to sit through. The odd, melodramatic feel, the sluggish pacing, frankly insane theme song, the appalling acting... it's a lot.

Streaming on Shudder right now. What a waste of such an amazing tagline.
Posted by Zombie Cupcake at 10:50 2 comments: