No, I haven't seen it, and no this isn't a review.

I purely wanted to document the fact that I have now witnessed three separate groups of my co-workers getting their knickers in a twist over the trailer for this. 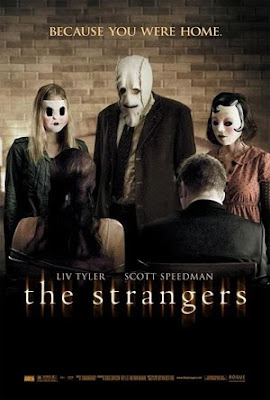 It is that line: "Because you were home" that has freaked all my colleagues out. They aren't horror fans as a rule, and apparently that line strikes fear into their hearts, because of its frighteningly simple, rational approach and 'it could happen to you!' connotations. It is interesting to observe their reactions to a film that is barely on my radar. Spooky sack masks aside, The Strangers barely creates a ripple in my own personal terror pool.

As much as I am a fan of home invasion based horror, it all looks a bit too much like a poor man's Funny Games to me. This is an unfortunate side-effect of exposure to that film very early on in my film watching career; will anything ever match up to it?
Posted by Zombie Cupcake at 09:34 No comments:

I won [Rec] in a FrightFest competition! First the Cloverfield advance preview tickets, and now this. I need to start entering more competitions if this is how my luck treats me these days. 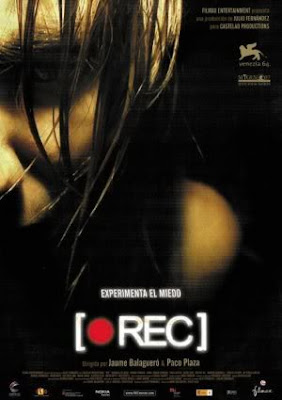 So excited to watch it. I have heard so many good things. Might have to have someone with me though... I have witnessed hardened horror fans saying how scary it is.
Posted by Zombie Cupcake at 14:17 No comments:

I went into the screening of this, not really thinking about it more than looking forward to seeing something with a little production value, after having just sat through Bubba's Chili Parlor. Bubba's was fine - fun even, and I am not the kind of person to badmouth a low budget zombie flick... However, I'm glad The Midnight Meat Train was the film we ended the night with - even if we did have to catch a mostly empty train home, afterwards. Gulp. 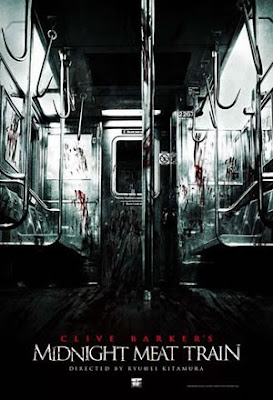 God bless someone finding Vinnie Jones a role where he can pull it off. The man had one word to say in the whole film, which worked - because I don't imagine Mr. Jones being shit-hot at accents, bless him - and all he had to do was look menacing and wield a huge fucking meat tenderising hammer. He did it, and he did it well. His presence and his strength are perfectly suited here.

Why strength, you ask? Because his character is beating people to death! It's so cool. He sits on a late night train and when a lone person is left, he gets his hammer out, walks up to them and just bashes the living shit out of them. 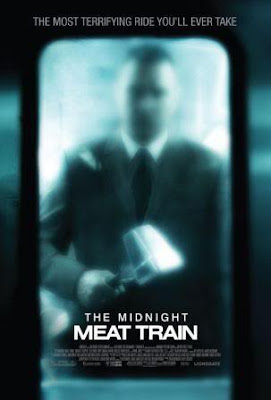 His character ('The Butcher') is so strong, and the film is so into giving the gorehounds some fodder, that the hammer scenes are some of the best in the film. Eyes pop out from the force of the blow, heads roll. It is really excellent stuff. I think I counted just one moment of shoddy CGI and that was it. The rest of the time I was squirming with glee and/or disgust.

You can tell the plot is from a short story, but the film doesn't suffer for that. Having the story be of a shorter length probably helped with writing the screenplay; as there would have been fewer distracting details, plotlines and characters to slim down into a nice sizeable chunk.

This is tight - there are only eight characters in it, and only a maximum of four of those would be considered main - and well paced, and most importantly of all: downright sick and enjoyably twisted in places.

I've never got into Clive Barker's writing, for some reason. Maybe it's about time I started?
Posted by Zombie Cupcake at 05:52 No comments:

My first Final Girl Film Club attempt. I’ve tried to avoid car-related puns as much as possible. It was hard! 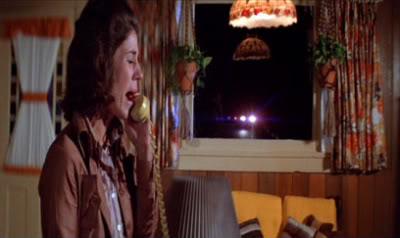 The DVD of The Car (1977) that I rented was very impatient for me to get watching. It started itself up without my say-so... Spooky eh? No? Okay then. So, just as a warning: the film itself doesn't get a whole lot spookier than that anecdote. This does not mean it isn't enjoyable, however!

As an opening sequence we have the first murder, in this town at least, that the vehicle commits. Two youthfully exuberant young cyclists are laughing and panting their way up a mountain road, when they have the misfortune to be caught in the orangey-red POV of the car in question. As the Jaws-esque "Duh duh DUH-DUH!" music builds… er, for quite some time... the car looms behind them menacingly. And soon enough, a pleasing smear of blood, a crumpled bike wheel and the triumphant honk of that damned car is all that is left of them.

This establishes what we are going to get over the next 96 minutes: the sometimes eerie, sometimes downright ridiculous plot of a huge black car menacing the population of a small Utah town. Prepare yourself for a lot of speeded up car footage.

James Brolin plays Wade Parent, a cop with two kids (Kim Richards I recognised from my Disney "thriller" days; Escape To Witch Mountain anyone?) and an incredibly annoying girlfriend. From the very first scene involving this woman, I was hoping to see her become a hood ornament at some point in the film.

Despite this poor choice of partner, Wade is cool. The evidence of this is thus: He has a great moustache, he likes gin, he has respect and admiration for his deceased cop father, he dotes on his daughters, he doesn't bother to wear a crash helmet on the motorbike he takes his children to school on - although does demand they both wear one. Cool! 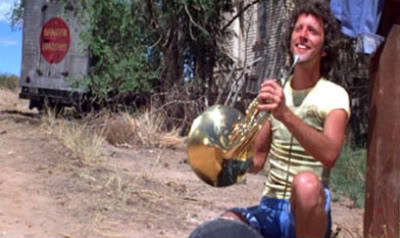 After a confusing segment involving a French horn playing hitchhiker, where I was certain some kind of fatal "French horn or car horn?" confusion may take place (It didn't. What a random and completely wasteful use of a brass instrument), the demon car begins to cause so much bloody havoc that it drives formally on-the-wagon policemen to drink...


In case we haven't caught on to just how evil this car is yet, we have an old Native American lady witness one of the murders, and later explain that there is no driver in this car. Quite how she saw this with any certainty, as its windows were extremely heavily tinted and it was nighttime, is never fully explained. Still, we the viewer are now several shades more creeped out than before. What the hell is going on here, and how are they going to stop it?

Yelling won't help, stupid Wade's girlfriend! Nor will cussing in front of schoolchildren. You're just lucky there was a cemetery nearby in which you could all hide, when it drove through your band practice.
What with the ground being holy, the evil car cannot follow them, you see. And it is here the threat of the car kind of falls flat for a moment or two. Unable to enter the cemetery, it loiters around outside for a while, revving its engine threateningly and... doing donuts. I think I may have chuckled a little at this point. Finally, bored, frustrated and with no one to play with, the car speeds off, leaving the kiddies safe and Wade's daughters finally accepting of his girlfriend, aww. Must have been all that cussing.

Next comes the winner of the "You've just sealed your fate with that line, you idiot" award. An expendable cop - for a small sleepy town, their police department is huge - leads the possessed vehicle up a mountain... do you see where this is going? Oh yes. Shortly after cheerily radioing back to the guys with: "No way down but straight down!" he's, yes you guessed it, toppled over the edge in his squad car. This sequence, and others that follow it, illustrate the common theory that the very moment a car falls anywhere, or is touched in an aggressive way, it immediately explodes. I've played Xbox games with more robust cars than the ones in this flick. 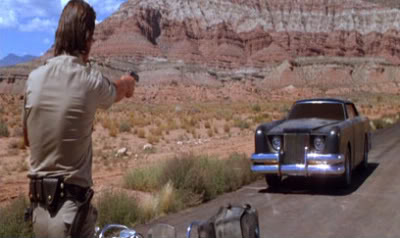 Before the climax, Wade manages to get up close with the car. What starts out as sinister, in that no bullets seem to mark or harm the thing at all (Wade: "Two rounds in the tyres. One straight into the windshield. Not a scratch on him..."), soon becomes a little chucklesome again. As Wade is peering at it wondering what to do, the car pops open one of its doors. The cop walks quietly over, and he and the viewer get a teasing glimpse into the interior of the vehicle. At this point things are still tense as we strain to see if the drivers seat really is empty. Then, the door opens fully and quickly, pushing Wade over into a ditch. So the car basically shoves him over into the dirt, like a bully in the playground. He then passes out and wakes up in the hospital.


Understandably, Wade has had it with this shit. It's a little embarrassing for a town cop with an impressive moustache to get hospitalised by a push from a car door, so he starts planning a way to destroy this hunk of murderous metal. Although, not before the car catches up with his girlfriend at home! In one glorious moment of car meets annoying character's face, I rejoiced.

The climax then: in an overly complicated plan I didn't entirely follow, the remaining cops and the town wife-beater (no, really, they bring him out of jail to help them!) rig a batch of dynamite in a nearby canyon and lead the car to it. In the emerging flames and smoke of the – this time justifiably – exploded car, an hilarious representation of the evil spirit inside the vehicle is shown. 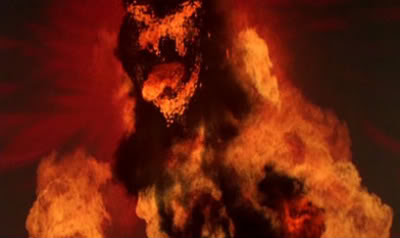 The car is no more. OR IS IT?! You decide if the pre and post credit honking hints at an eternal evil... or just an over enthusiastic use of the same sound clip.


This film was definitely watchable, despite my initial reservations. Moments of it were genuinely creepy; with the car lurking and silently emerging from the shadows, and the "open pipes" revving of the engine was threatening purely because it was such a loud, intense noise.

Depending on your mood, the fact that we are told the car is without a driver adds another level of menace or absurdity to the proceedings. It's either a case of "OMG no driver? *shudder*" or "No driver? Okay you've lost me, I'm out."


Hey, I like lists. Have one of the few aspects which prevented me from getting really into this flick:

It was a fun movie though, and I'm glad I made time to watch it. I'm thinking of making the laughable/scary "Honk… honkhonkHONNNK!" sound my new text alert noise...
Posted by Zombie Cupcake at 06:14 3 comments: