Again I found myself watching a "holidayers in peril" movie, and again I have Dad to thank, in a way.

He undoubtedly started my fascination with urban myths. I remember him regaling me with them when I was probably too young and imaginative to have been given such fodder. I love you Dad! His favourites were ones like these, and also the tale more closely related to this review: kidney theft. Horrible, scary, brilliant.

Not one of those three words can similarly be applied to Paradise Lost, sadly.

It starts promisingly enough, with an impressive bus crash in the middle of nowhere, Brazil. The American, English and Aussie tourists team up and head to a nearby bar. It all seems too good to be true: a beautiful beach, free flowing booze served by gorgeous friendly locals. What could go wrong? Surely a crazy with surgical experience and most of the Brazilian cast under his orders, isn't going to somehow drug these fine specimens, cut them open and steal their organs?

Well actually yes, that is exactly what is going to happen.

For the first half the feeling of escalating panic and helplessness is conveyed well. What starts as an "Oh shit we've been robbed" situation soon becomes much worse as one of the group accidentally injures a local boy, incurring the wrath of the locals and forcing the backpackers to flee. When they do eventually find shelter, it is in the house of the aforementioned kook.

Once here however, a lot of the suspense disappears into the surrounding jungle. At this point things should be ratcheted up, I should be squirming and chanting "Get out, get out - RUN!" at the screen. I wasn't though, in fact I was a bit bored. The boredom only increased when badly lit action scenes started appearing. Just like in Shrooms... What the fuck?! How is this allowed to repeatedly happen? With no idea who is tied up, free, hero or villain in the murk onscreen, it was going to take some kind of special dissection scene to get my interest at all piqued again.

Ways in which the dissection scene succeeded: 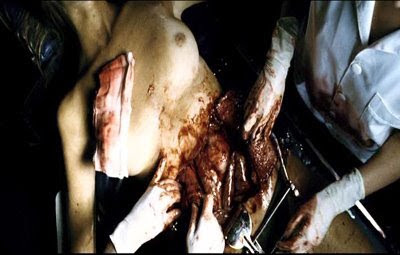 From here, I couldn't be arsed to cap it myself.


Ways in which the dissection scene failed:
Director John Stockwell commented on the fact that this is the scene people will leave the theatres talking about. Yes John, because that is the only decent thing about this movie!

One day I will find a film worthy of my passionate love of urban myths... one day! *shakes fist*
Posted by Zombie Cupcake at 11:35 4 comments:

I had no interest in seeing Shrooms after hearing more than a few whispers about it being shit. However, my Dad bless his heart, picked the DVD up for me as present. He knows I love horror of any sort, even though he is very fussy about which sub genre he personally enjoys (no magic or supernatural elements, nothing too violent, he's more into tension than scares. The only horror film I know for certain we both love is Black Christmas). So I was touched he saw a horror DVD and thought of his little girl.

Therefore it was a duty to my love of my pa to watch this, rather than an expectation of it being any good. And of course, I reckoned either way I could get a blog entry out of it.

Well... it does suck! I shan't tell Dad just how much, but it really does. The film's messy (not gore, just poor execution of extremely derivative ideas), the characters are supremely annoying and the drug thing just alienated me even further, if I am honest.

Like a straight man going to see the Sex & the City movie, I realise that I am by no means the target audience here. The title alone tells me that this is going to be hur hur drugs based and as someone who has been there and done that (enough to satisfy my juvenile curiosity in any case) the whole drug-holiday thing immediately had me in my cynical hat, wishing these tossers would just crash their car on the way to the camp site. Credits roll. End of.

To you I may sound uptight about the whole thing, but think about it this way: this is a horror film first and foremost, the drugs being the sub-category. I should still be able to sit through this and enjoy the suspense, special effects, creative kills etc, right? Wrong.

It's flabby. Nothing much happens for ages to unlikeable characters. Even though nothing is happening in quite spooky surroundings... 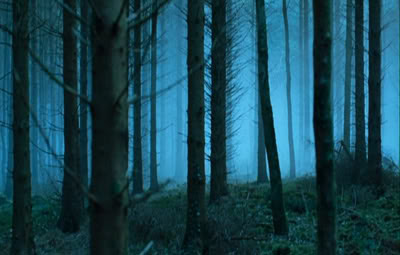 Okay so plot: A group of American students meet their English friend in Ireland, go to an isolated woodland area, camp out and pick mushrooms. One of the bunch eats a variety that they were previously warned against, because it brings about dangerous hallucinations and unpredictable behaviour - that's if you survive the initial violent reaction from ingesting just one cap.

What follows is a cat and mouse chase through the woods; bathed in cold light we are subjected to many shaky camera angles and non-linear flashback/premonition/"false reality" trippy scenes. This is the most effective the film gets and in theory should work wonders. Everything is messed up and crazy, we don't know what the hell is going on and what is real, if anything. We the audience are feeling as thrown off balance as the characters, one step closer to being in their shoes and therefore one step closer to feeling their fear...

Sadly in practice it just doesn't work that way, and simply ends up being boring. Not even interesting enough to be frustrating.

The kills are only worthy of a mention in that they are confusingly presented, so sate absolutely no gorehound appetites for seeing these kids get dismembered nor do they really scare us, because we don't have much comprehension about what the fuck is going on. I understand that we have to keep with the disoriented vibe but for the love of god show me the guts spill! What's the point in me being here if it's all cutaway, too dark, fast-edited nonsense? The kindest word I can use for this film is "atmospheric". 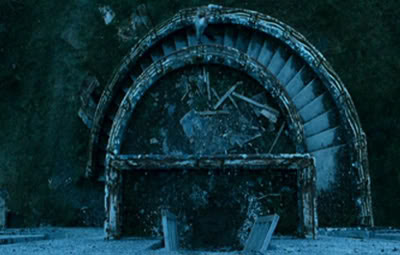 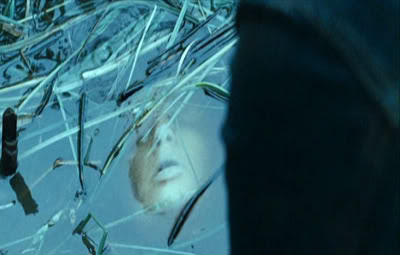 So who is the killer? The accent-confused, cabin dwelling locals? The druggy know-it-all Englishman who has brought them all out into the middle of nowhere and who keeps alluding to his boarding school past? Someone else entirely? Whoever it is, they seem to make the same weird purring sound that the Predator does. Shit, maybe it is the Predator?! 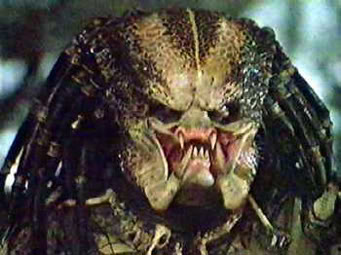 I shan't spoil it because if you make it as far as the end you bloody well deserve a reward.

The most I gained from this was a respect for the actors for spending so much time rolling around so thoroughly in all that mud, water and shit. They must have spent most of the shoot soaked and freezing. 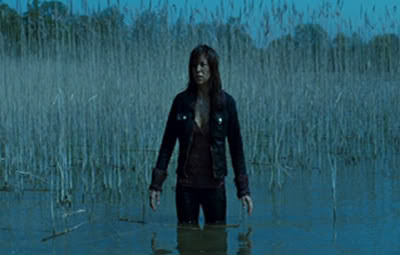 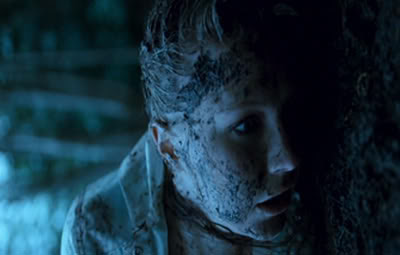 One final thing... would a male paramedic really say to a young girl under his care: "Nasty gash you got there." Really? Really?
Posted by Zombie Cupcake at 18:23 3 comments:

I put on Land of the Dead last night. I think I can be honest now and say that the film more or less blows. Not hugely, but it's not very good. I loved it at the cinema, but then cinema does that to me. The dark room, the huge screen, the excitement and totally engrossing... er, ness of it. That and I so dearly wanted to love Romero's "comeback" film. Eh. The best thing about it is the band at the start. It kind of slides slowly downhill from then on. Although the arm being ripped in two in silhouette remains pretty damn cool.

I'm not sure Romero is too bothered about it anyway. I seem to remember reading he wasn't comfortable with the big budget and the expectation that brings (never mind the fact he's the zombie Godfather!). He doesn't sound too impressed on the commentary track, it has to be said. And after having been obsessively listening to the Creepshow one lately, the difference is huge. He and Tom Savini giggle and ham it up and share some genuinely fascinating facts during the latter; in the former there are long gaps between very dry and matter-of-fact tales from the shoot. Perhaps it's because he was smoking during Creepshow?! We know how much he loves those cancer sticks. Anyway I fell asleep to it, so that tells you a lot.
Posted by Zombie Cupcake at 09:34 No comments: