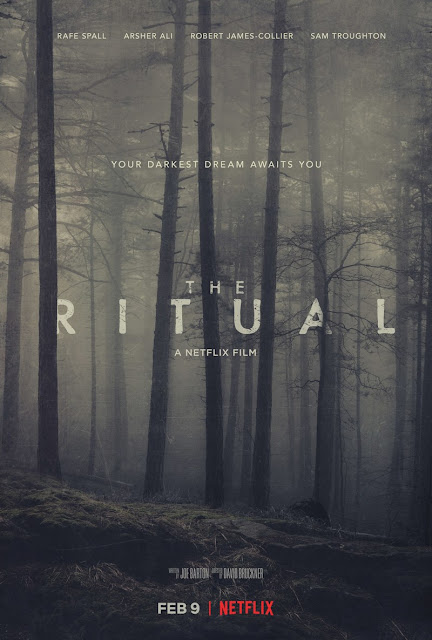 I fancied watching this again recently, and I'm really glad I did. Spoilers incoming!

Based on a novel by Adam Nevill, directed by David Bruckner (who co-wrote and directed Amateur Night in V/H/S and The Accident in Southbound) this Netflix movie takes us deep into dark Swedish forests with a group of friends.


Tension exists between these men, as we find out that Luke (Rafe Spall) carries a heavy burden of guilt for not stepping in during a violent attack which opens the film. The knowledge they all have of Luke essentially standing by as their friend Robert (Paul Reid) was killed hangs heavily over the beginning of their trip. We see Luke wake from a nightmare about the murder, and throughout our time with him images ripple through his reality of the trauma from that night.

These scenes are some of my favourites, as imagination and reality/fabricated building interior and forest mesh so effortlessly and organically together. It's incredibly impressive and extremely disconcerting. It reads very much like something out of a dream, where details and settings bleed together in a singular landscape.

On the night Rob died the lads were trying to decide where to go on holiday together, and now, six months later they find themselves hiking as a tribute to him (as he'd originally suggested it). Hutch (Robert James-Collier) is clearly the most comfortable in the outdoors, with the others joining through a sense of sad duty. These are middle-class affluent types, paying £200 for their hiking boots but neglecting to break them in before the trip. They are kind of out of their depth before they even set foot in the forest.

The turning point of events comes after Dom (Sam Troughton) gets hurt, and they make the decision to take a short-cut back to their lodge. Rather than staying out in the open, they realise with reluctance that entering the dense forest is the quickest way back. 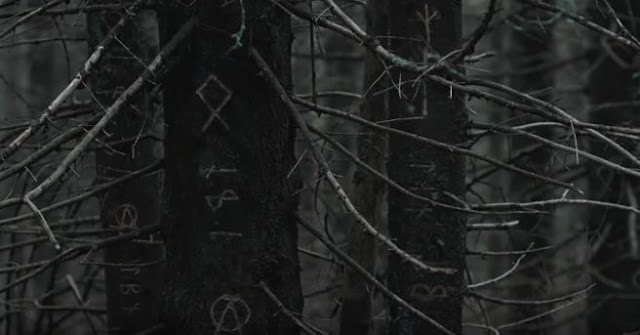 It's dark, damp, and visibility is low through the arrow-straight trees. Luke repeatedly thinks he sees a glimpse of something moving in the distance and tensions increase as pain and exhaustion take hold. Everything changes after their first night in the forest. Breaking into an abandoned cabin during a storm, they wake the following morning, nerves shredded from terrifying nightmares and sleepwalking.

There is a palpable feeling of a dark presence infiltrating their minds as they slept, pushing its way into their deepest fears. The most alarming awakening is from Phil (Arsher Ali) who is found naked in a "praying" position in front of a terrifying headless totem. 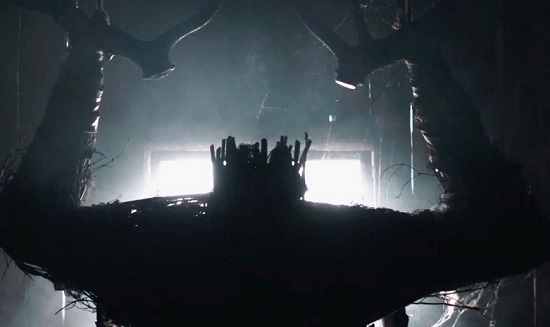 No one, especially Phil, is ever the same after that night. Arsher Ali doesn't have an awful lot to do aside from this, unfortunately, but he gives a haunting performance as someone who can't process or escape the fear of his ordeal. Phil is shell-shocked and violated.

Similar to the "lost in the woods" idea, the stripping back of anything our characters have -  in this case: possessions, unity, sanity - is not a unique narrative approach, but in capable hands, it's so effective. The lads start with the latest gear, and end with nothing, having lost tents, party members, and a full grip on what the fuck is even going on. With a steady hand, The Ritual peels back to the terrified primal core of these characters. 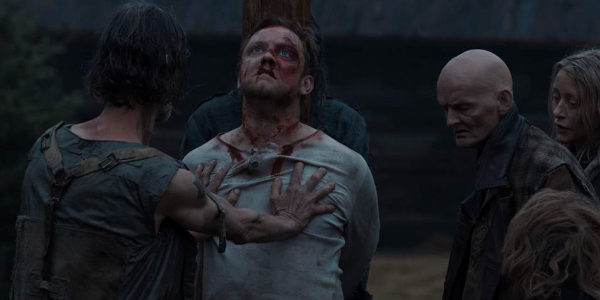 The creature reveal is what solidifies the success of this movie for me. This beast is a "Jötunn", an ancient god worshiped by villagers and offered sacrifices of unsuspecting visitors to the area (their possessions dot the landscape, nature claiming them in varying degrees). In turn, the locals are granted unnaturally long lives. The things we do for eternity, eh? I did find it interesting that none of the villagers seem particularly happy, however. Their lot appears more duty and fear-fueled than actively wanting to be eternally stuck in this existence.

The design of the Jötunn is stunning, even in full view it's difficult to comprehend as it seems compromised of human and beast body parts, as well as having aspects of the forest, too. It feels profane in a way that both captivates and repels.

As Luke attempts to escape his fate of being trapped forever, this showstopping moment is captured: 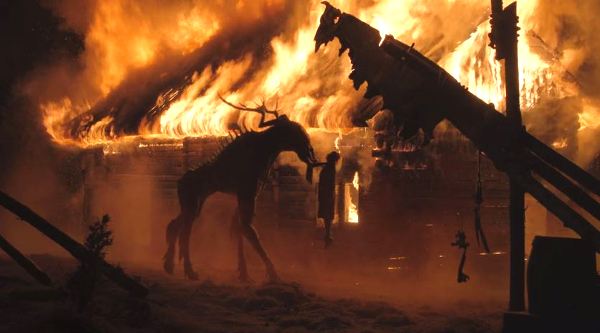 If he had lost his mind then and there, who could have blamed him?

As the third act draws to a close, the warm tones of a burning village give way to a landscape bathed in dawn light. In the far distance we see a car on a road. Luke is returning to civilisation and leaving old gods behind. At least physically. He was chosen because his "pain was great" - is his pain gone, by the end? I doubt it. If anything it's deeper, along with his guilt. His primal scream at the creature stuck at its forest's edge certainly hints at a lifetime of nightmares to come.

This movie would pair well with Blair Witch for a night's viewing, as I think they'd complement one another for a "we're lost in the woods and we're f*cked!" double bill. Tents and trees by torchlight; distant, gigantic sounds you can't identify... That kind of fear pre-dates almost everything, it's woven into our lizard brains.

The Ritual is streaming on Netflix now. I appreciated the abrupt, not-necessarily-sad but definitely not happy ending (see also: Calibre). Beautiful landscapes, old gods and flawed humans - what's not to love? Very tempted to pick up the book and see how the two compare.
Posted by Zombie Cupcake at 17:01 No comments: