The term "feel good" is something that has only recently become associated with the zombie genre, am I right? Off the top of my head, we've Shaun of the Dead, Dance of the Dead and Zombieland... all films that, despite being about corpses and their attempts to eat a bunch of survivors we rather like, nonetheless leave the viewer feeling chipper as the credits roll.

Wasting Away is another one of these films. It'll make you all warm and fuzzy inside, I guaran-godamn-tee it. It's the sweetest zomb flick ever.

With the tagline "zombies are people too!" it comes at the genre from a different angle to usual, by telling the story almost exclusively from the point of view of likeable undead. The film Colin also does this I know, but the extra twist here is that for most of the film these kids don't even realise that they are zombies. Also, this is a hell of a lot more lighthearted. 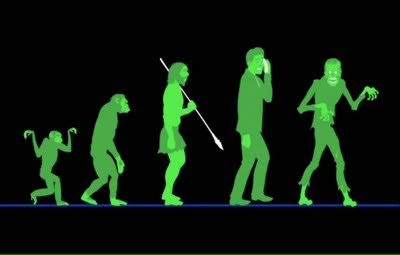 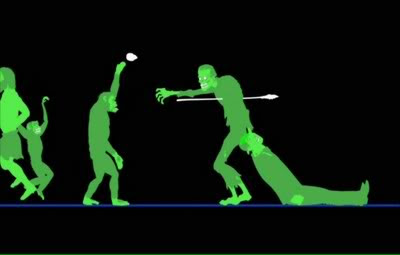 The main characters are then introduced. They are four friends, made up of two girls and two guys - one of whom ('Mike'/Matthew Davis, top) consistently reminded me of the delicious Joey Comeau (bottom). 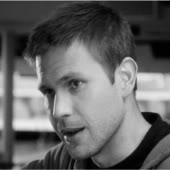 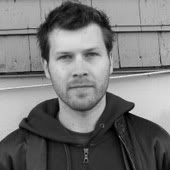 A dull evening spent hanging out together is livened up when the group accidentally consume some strange liquid, developed by the military and with the power to kill and then reanimate those who drink it. Yeah, okay, this idea isn't all that new... but there are only so many ways to skin a plot device cat. Plus, it allows the film-makers some fun with the visuals. 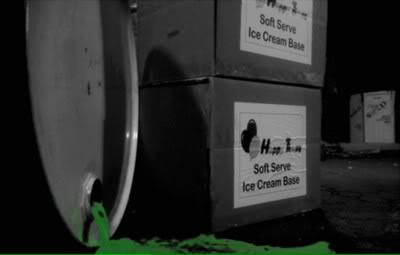 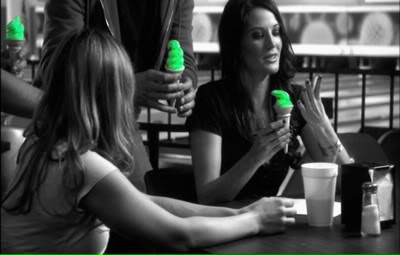 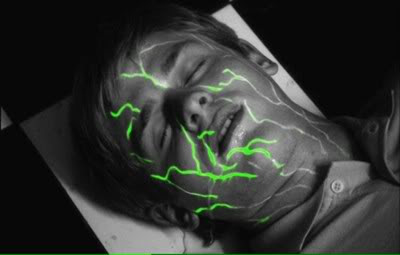 After some impressive death-throes, they wake. Realising something is amiss after finding all phone lines down, they go to investigate the town. It soon comes to light that because zombie brains run a lot slower than normal ones, when the quartet observe humans they appear to be doing everything at double speed. It also means that drunk people and their booze-addled noggins do not register the undead, instead seeing them as normal people - something that comes in handy later on. 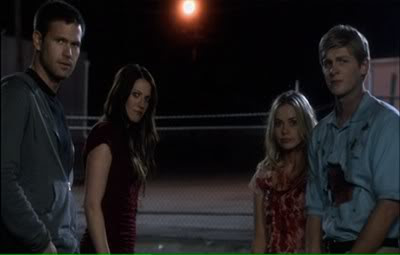 The drunk's view and how the group assume people see them... 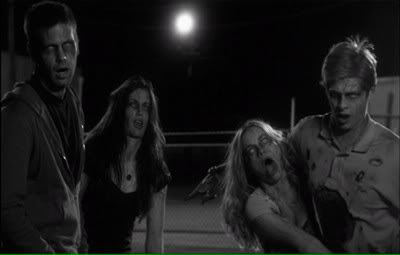 We follow the unsuspecting ghouls as they make their way around town, under the impression that everyone else is infected rather than themselves; they check in on family and go to job interviews, with sweetly farcical results. Eventually they learn the truth of their situation and have to decide what to to do about it.

The main source of the film's charm comes from the central couple, Cindy and Tim. In life they were in love but were too shy to ever vocalise it. In death they finally find the words (groans) to do so. There are a few classic moments relating to the zombie lovebirds: one involving them describing to their respective friends about the consummation of their affections ("It fell off...?!") and another where we witness that a romantic kiss to them, is something else entirely to mortal onlookers. 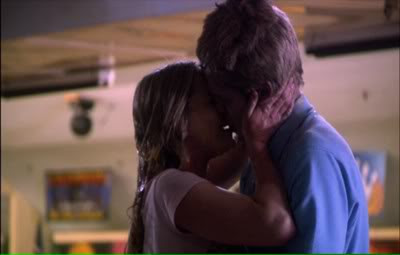 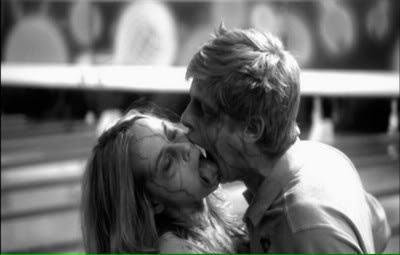 As you may have noticed, Wasting Away has a very distinctive look to it, this is one of its many strong points. When we are with the friends the film is in colour, when we see them as others do, ie: lurching, groaning corpses, it is black and white. It's a simple enough technique, but it works brilliantly and easily defines the movie's two perspectives. 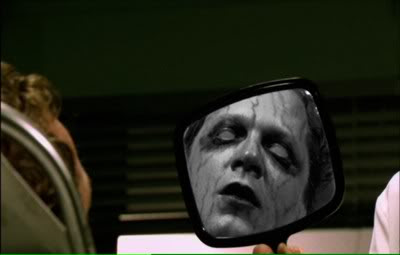 Something I wasn't expecting, was that this film contains some of the best zombie movement work I have seem in a long time! I don't know who trained these actors - if anyone - but the gait they all adopt is fantastic. It's back to the old school here: the lolling head, the stiffness of the legs... none of that running, screaming and leaping from a second storey window shit.

What is beautiful is that it's not even the same lurch for all of them. They each translate their zombification differently. I know it's a small detail, but it is one that can really raise a zombie film up if done well. This, combined with the imaginative visuals and pitch-perfect level of humour on show all adds up to hoist this film into my top five favourites of the genre!

This movie has done the following: 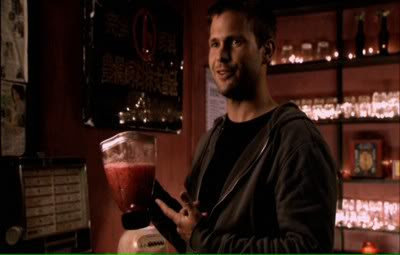 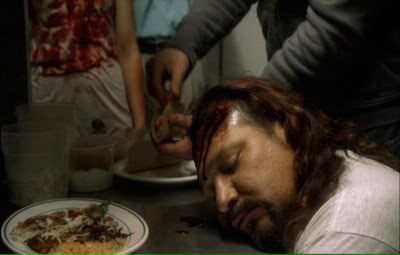 The festive season is nearly upon us my friends, I urge you to ask Father Christmas for this DVD. I highly recommend it!
Posted by Zombie Cupcake at 21:28