I was delighted to be asked to guest on my friend Justin's podcast recently, to talk about 28 Days Later! It was a lot of fun to chat about one of my favourite films.

A post shared by Amusing Ourselves to Death (@amusingourselvestodeath) on Oct 26, 2020 at 5:29am PDT

Posted by Zombie Cupcake at 16:21 No comments:

What is time, amirite?

Fuuuuck, this year... I am taking a different approach to 31 Days of Horror for 2020 and refuse to feel bad about it!

I am not assigning a film to a day, NOR am I attempting to review them all (I'm thinking maybe one a week?) NOR am I even starting with 31 (or more) films. I simply made a list of movies I am excited to watch this October.

Click the image below, if you want to know what I have to pull from, and please feel free to share your own list or plans for the spooky season 💀👻🎃 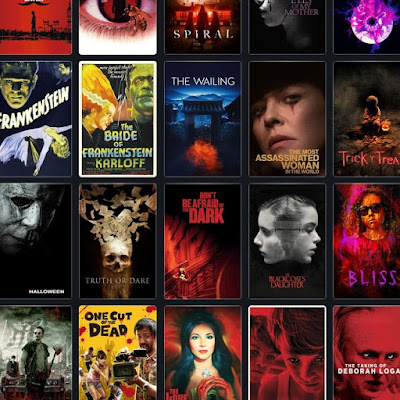 Posted by Zombie Cupcake at 16:15 No comments: 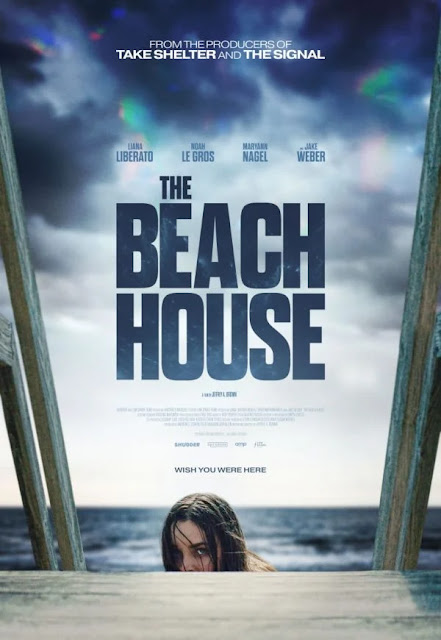 Written and directed by Jeffrey A. Brown, The Beach House is his debut feature, and folks, this film is an impressive beginning. It looks amazing (WOWEE do I love shots where the horizon slices through the middle!); the action slides along at a steadily increasing pace; it's weird and squishy and ultimately pretty sad... It's all here, and the grains of sand of this story really stick.


As usual, I went in as clueless as possible to watching, and it was particularly enjoyable. It turned out I had assumed completely wrong with regards to the type of film this was going to be, having seen little more than the poster (above) and some positive reactions on Letterboxd. Knowing almost nothing and assuming wrongly made the plot developments even more unsettling.


With that in mind: I'm not going to heavily spoil The Beach House here, but I do urge you to stop reading (and to not read the tags on this post) if you haven't seen this movie and plan to do so soon! 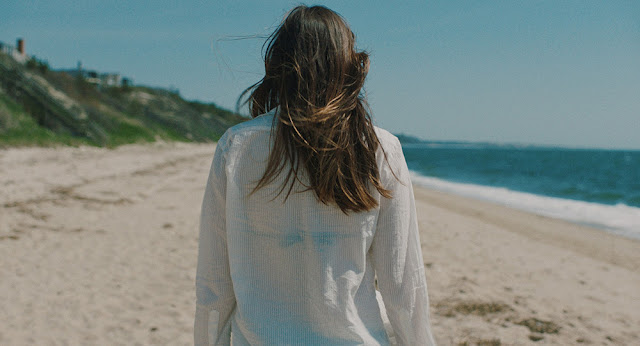 Emily (Liana Liberato) is visiting the family beach house of her boyfriend Randall (Noah Le Gros) for the couple to attempt to reconnect after he dropped out of uni and started behaving strangely.


(...If I had one criticism, it would be that Randall's backstory seems to be developed more than is ultimately necessary. It gives us some meaty insight into him as a person and fleshes him out, but I felt as though what we're told might be more relevant by the end. It isn't. This is barely a complaint, however, and I'll take over-developed characters over under-developed pretty much always).


Emily is portrayed as sensible and smart, with some canny and portentous info dumps about her fascination with organisms and bacteria (she's an organic chemistry student), but she's still shown as young enough and in love enough to be putting up with a bit of a crappy boyfriend.

Not long after they arrive, Emily realises the house isn't empty of inhabitants, finding medication (a lot of medication), a stocked fridge, and dirty dishes. It appears that Randall - who, now that I think about it, spends most of the first two acts laying down or asleep 😆 - didn't ask his father if they could use the house, he just assumed it'd be free. Unfortunately, it's been promised to some family friends. 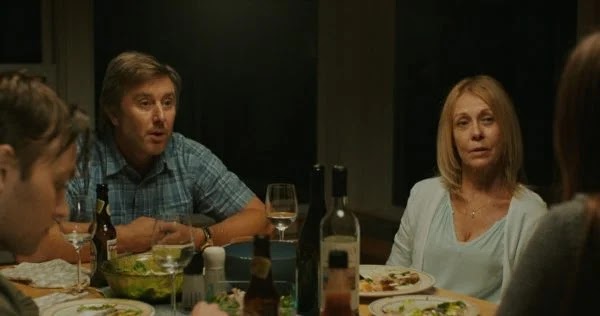 Mitch and Jane (Jake Weber, who I recognised from the Dawn of the Dead remake, and Maryann Nagel) are a slightly odd but seemingly harmless older couple who invite Emily and Randall to stay in the house - "there's plenty of room!" - and have dinner with them that night.

Exposition ensues. Randall suggests the group do edibles together. The night starts to get weird. 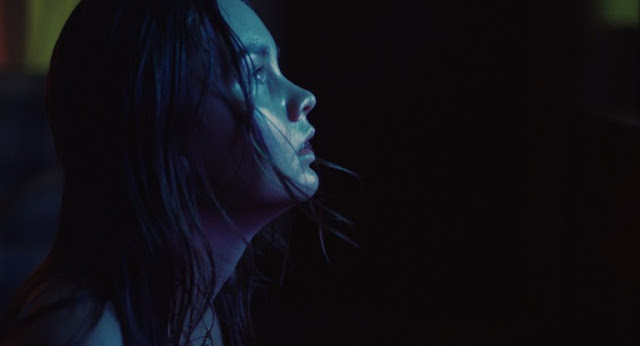 There's a sense of groggy clamminess that begins around this point, and it sticks until the final shot. Whatever is making these people feel so sluggish, be it drugs/drink/something else (or a combination of all three), the physical and mental effects of it are revealed in such a way that it makes you want to mop your own brow. That sense of being drowsy, muddled and heavy-feeling. Even the clichéd perception-shift shot of the ground coming up to meet Emily when she passes out seems incredibly appropriate and effective here.

The Beach House is full of fog, outside, across the water and land as far as possible, and internally, inside the character's heads as they sweat and crawl and panic. 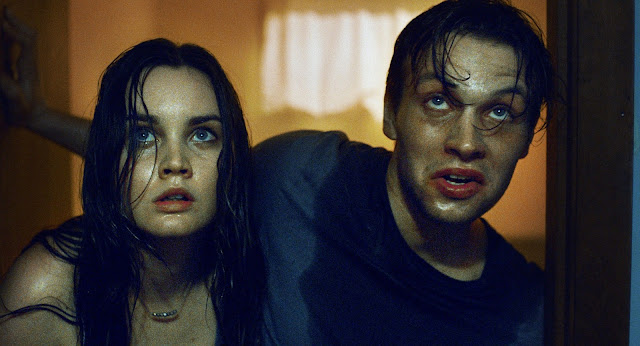 A slow burn within a tight 88mins. An It Follows bedfellow with icky visuals (I'm looking at you, kitchen scene and basement scene!) and cosmic threat. It's a tale of an intimate undoing within a planetary one.

Cosmic horror is defined as:

"fear and awe we feel when confronted by phenomena beyond our comprehension, whose scope extends beyond the narrow field of human affairs and boasts of cosmic significance".

I'd say that The Beach House can definitely be filed under that.

Jeffrey A. Brown proves that with vision and imagination, a limited budget means absolutely nothing. Streaming on Shudder right now!
Posted by Zombie Cupcake at 16:20 No comments:

I wrote this a while back for another site, but the project didn't work out. Seeing that it's now streaming in Amazon Prime I thought I'd throw it up here... 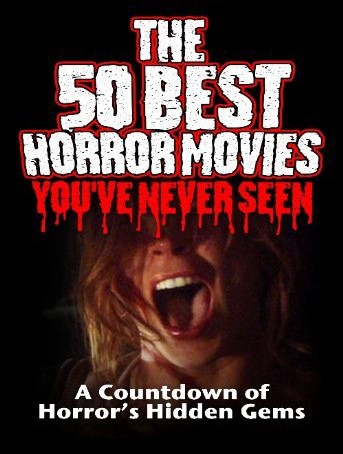 
We all love a countdown show, right? A couple of hours playing pop culture bingo, agreeing with or disputing the decisions and rankings. It's a good time. When I came across this one from 2014 (and that title which, frankly, felt like a challenge) I couldn't resist.

First, let me say that this is not a top tier production. It’s affiliated with the now-defunct Shock Till You Drop website and directed by Anthony Masi, whose career seems to mostly consist of making horror documentaries. It’s populated by passionate horror fans who work in the genre - but don’t expect any heavy hitters.

The biggest name is PJ Soles (Lynda in Halloween) who narrates. Besides her, there’s a motley crew of indie horror creators, mostly c-list actors, and journalists and bloggers you've probably never heard of. As you’d expect, they each pop up intermittently and give a little context, personal opinion and recommendations for each movie. Some of them are better at being in front of the camera than others, but the worse it gets are some cheesy jokes and dated comments about sparkly vampires.

What’s cool about this countdown is that it’s pretty much spoiler free, so if any of these films do catch your interest, you can seek them out happily knowing nothing more than the basics.

Here’s the list. What do you think?
(btw I've linked any that I have reviewed in the past).

If you're the kind of person who’s going to watch 2 hours of something with a title like this, I'd say you've probably heard of, if not seen, a lot of these movies. Perhaps this was made more for spooky scene-setting, to be aired around Halloween for inspiration, but for those of us who kind of live and breathe horror, there’s a fair amount of “well, duh” entries. However, I did get a couple of new films to check out such as The Fury: Brian De Palma made a telekinetic horror movie?! Sign me up immediately! And The Exorcist 3: which I always assumed was crap, but apparently it's amazing.

The one that jumps out as a dubious addition in my opinion is number 45. Despite a juicy premise, Grace was a big disappointment lacking the gut-punch you expect from baby-horror. I’d swap that out (choosing pre-2014 films to keep it fair) for the “humans are the real monsters” tale of Deadgirl or maybe the bloody mindfuck of Triangle.

The 50 Best Horror Movies You've Never Seen is worth checking out if you’re in the mood for something inoffensively horror-adjacent. While not something that's going to truly blow any horror fan's mind, the countdown doesn’t drag, there are some interesting tidbits, and you might just discover some new favourites.

Currently streaming on Tubi, Amazon Prime and Youtube, too.
Posted by Zombie Cupcake at 12:04 No comments: