here for the boos.

We've a way to go before October... but it's definitely starting to feel more like autumn than summer now, and while indulging in my first pumpkin flavoured item of the season today, I had an idea.

As well as attempting to watch and review horror every day next month, I'm also going to enjoy some fine (I hope) pumpkin beer whilst doing so, and let you know what I think about those, too!

Pumpkin is a tricky flavour to master, so every October I sample a few to see who got it right. I thought it might be fun (and to be fair, I am taking more than a little inspiration from the True Crime Garage podcast) to sip on some seasonal brews while watching seasonal films.

So again, recommendations are welcome. At this point I am probably just going to start scooping up whatever I can find to have in the 'fridge ready to go - any I should keep an eye out for...?
Posted by Zombie Cupcake at 22:01 No comments:

dive right back in.

Hi. So I've been slowly finding my way back to the genre after an extended hiatus, brought about by a combination of (too real) real life stuff and just generally being fed up with bad horror movie after bad horror movie...

It's pretty depressing in itself when you can't watch your once favourite type of film due to feeling too crappy... and when you do feel good enough to take the plunge, they almost always turn out to be stupendously disappointing.

Apart from You're Next. That one I liked.

BUT, I miss it. And I miss writing about it! So with the spooky season upon us I wanted to set myself a little challenge. I'm going to watch at least one horror movie a day throughout October AND I'm going to write about every. single. one.

It may be a proper review... it may be a version of "live-tweeting" the movie as I watch it... it might be somewhere in between those two. Or something else. I don't want to limit myself or promise anything too lofty or specific, because this is really just an exercise in getting back into the swing of horror blogging.

I'm excited about it, which in itself is pretty thrilling! 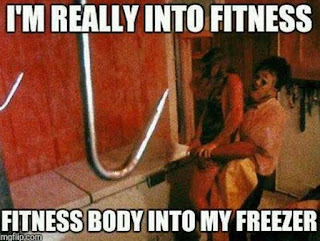 So I've been working on the list, because I must have films in the barrel ready to go, or else I'll fall prey to the first world Netflix problem of taking longer to choose a film than watch it. So...

Does anyone have any recommendations?


I've already filled a lot of the slots with movies I've had on my "To Watch" list for a while, so I'm excited to finally have a reason to get through those. The rest are some I've been wanting to re-watch for a while but have held off with this in mind. This leaves space for a few suggestions! (ideally something I can find on US Netflix or Showtime streaming).

This is subject to change, but here we go, so far: