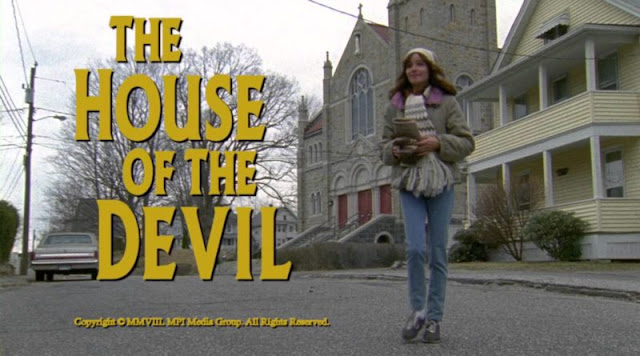 If you've heard one thing about Ti West's The House of the Devil, it's more than likely how successfully it mimics the slasher films of the 70s/80s, despite being from the early 2000's. The level of detail and care is indeed astounding, with really only some familiar genre actors giving the game away.

There are clear acts in this movie; the first introducing us to Samantha (Jocelin Donahue), a sophomore at university who's looking to move out of her shared dorm into a cool new apartment. Donahue plays Sam perfectly and charmingly unremarkable - an opening scene shows she's "landlady approved": testament to how vanilla she is - and both her sexually active, punk roommate and street-wise best friend Megan (Greta Gerwig) appear to be more interesting characters. Sam has uncomplicated wants at this point in her life: she just needs enough money to write the aforementioned new landlady (Dee Wallace!) a cheque. 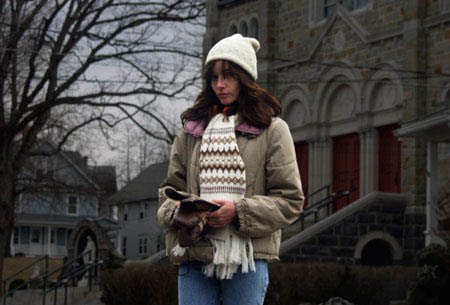 The second act establishes that Sam is so desperate for money that she's willing to make some questionable decisions when it comes to a babysitting gig she answered an ad about. She accepts the job for that night - a night of a lunar eclipse, no less - with little-to-no information, and when she meets the family, she ignores her instincts (and those of Megan) about how increasingly odd this all is. We watch her make herself at home in what is a quintessential house for this type of movie (think the sorority house in Black Christmas but scaled down a bit; lots of stairs and passageways). She orders pizza, dances around to her Walkman, and does a little light snooping. Normal babysitter stuff. 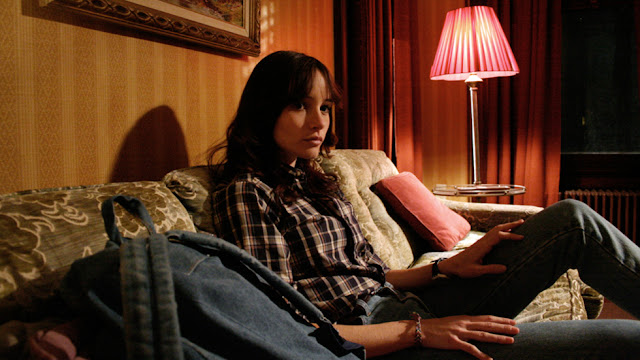 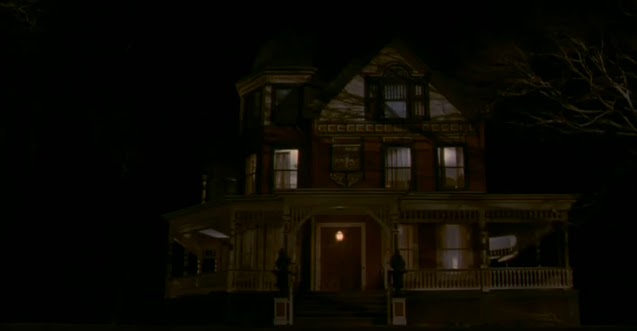 Come the third act, Sam has shed the shackles of her earlier worry, and descended through woozy fear into full blown survivalist hysteria. Behind the doors she neglected to open during her nosing, this house holds its darkest secrets, and once she wakes up to them it's the beginning of the end. 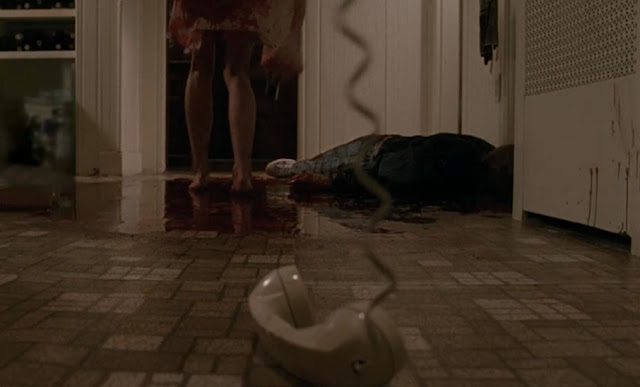 Shot on 16mm film and using the same techniques from that time too, this is both a loving tribute and an enjoyable movie in its own right. Claiming to be based on true events from the "Satanic Panic" era in the US, its 95min runtime makes use of every second to establish Sam's plain existence and then tear it apart.

This awareness of itself in the best possible way, along with a gently creepy turn from Tom Noonan, and beautifully sewn seeds of dread as the film progresses, plus some wonderful, Exorcist-like subliminal work in the final act, make The House of the Devil an absolute treat.

It's streaming on Shudder at time of writing.

Once you've seen it, check out some of the alternative/fan-made poster art that can be found online. There are some truly gorgeous ones out there and people really had fun with the retro vibe.
Posted by Zombie Cupcake at 22:40 No comments:

Coming off the back of a true crime binge (I pretty much constantly listen to true crime stuff, but recently it's been particularly intense) I've been tempering my desire to watch home invasion horror movies. This is a sub-genre I really enjoy, but part of that enjoyment stems from the fact it's one of the most terrifying.

Nevertheless! Once I realised it was on Shudder, I couldn't put off watching Angst (alternative title Schizophrenia) for very long. This may well be the granddaddy of home invasion movies, and it is a relentlessly unsettling experience. 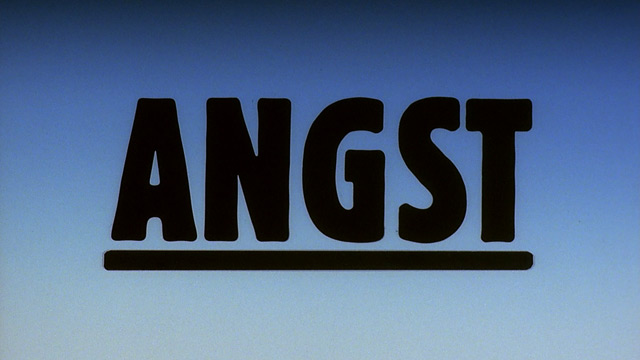 Made in Austria (in German, with subtitles) and directed by Gerald Kargl - causing such controversy and box office backlash upon its release that he never made another movie - Angst is based on the true case of mass murderer Werner Kniesek and even utilizes phrasing from real confessions...

(How do you know you're too deep into true crime? When you can identify real confession dialogue without being told...)

The story chronicles the first 24 hours of freedom of "K", a psychopathic murderer. We not only follow K (an astonishing performance by Erwin Leder, whose other roles include Das Boot, and er, Underworld) but we're inside his head, too; hearing all of the manic thoughts, twisted leaps of logic and sickening plans that pass through his damaged brain. 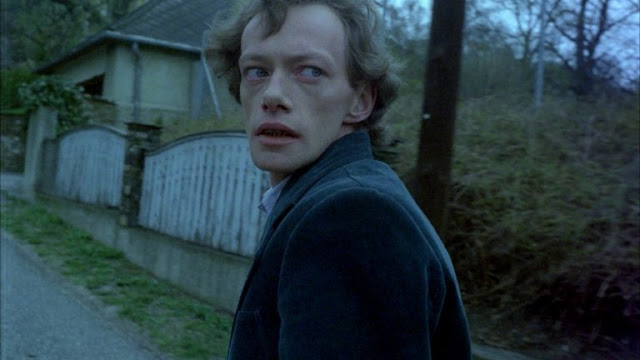 Angst has us witness, in painstaking detail and intimacy, every single moment of this man's mania; the entire spectrum from an almost hysterical bloodlust, through sweat (and semen :/) drenched murders, to the post-kill clean up and groggy comedown, to thinking about doing it all over again.


We see him leave prison and immediately begin the hunt. Like a true addict, he's desperately uncomfortable and barely able to function, he needs to spill blood so much. We watch as one-by-one he chooses victims and dismisses them, finally finding a satisfactory set-up: a huge but strangely devoid of furniture house to break into, and a family to terrorize. 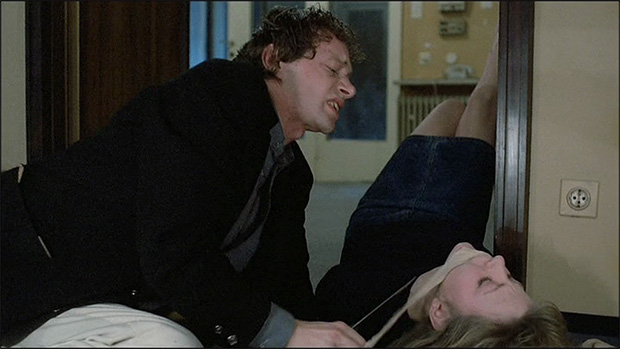 Sparse of dialogue in-scene, much of the exposition comes from either a doctor, giving comprehensive background and the medical/criminal diagnoses of K; or the man himself, narrating his obsessive frenzy.


He speaks incessantly of his "plan", although this spree repeatedly plays out like he's close to losing control of the situation. In one of many choices made that tinge the film with horrible realism, K is not a "cool" looking dude (see: most serial killers are awkward, conventionally unattractive individuals). He is a thin, sweaty, rat-faced man. His strength comes from his psychosis, not from his physical stature, and so even though he possess a terrifying presence, he is also barely able to move his hostages, alive or dead. There are numerous, uncomfortably protracted scenes of him dragging his victims from room to room. 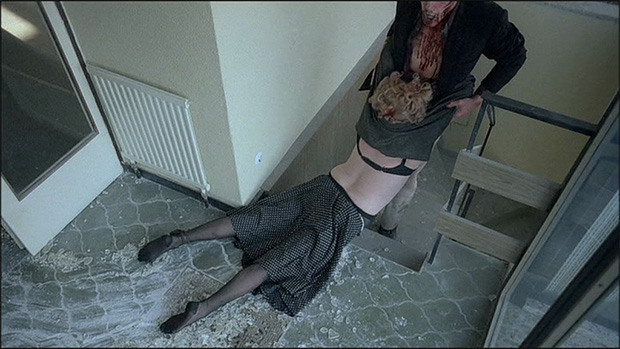 "Visceral" is a word that gets thrown around a lot in this genre, and there are definitely a couple of instances in this movie where that word springs to mind.

Learning that Gaspar Noé is a fan of Angst came as absolutely no shock, and the sickening violence and profound sadness of Irreversible now makes a little more sense. Tonally both films are brutal in subject matter and uncompromising in their portrayal of it. They're also both aggressively visual pieces of cinema.

The cinematography in Angst was by Zbigniew Rybczynski who, I was excited to learn, was the director of a short I became slightly obsessed with a couple of months ago!

The camerawork often takes on a dynamic, experimental style: when K runs, the vertigo-inducing "SnorriCam" is used; our viewpoint appears abnormally high up in some scenes, and too low to the ground in others; outside, what today would be a simple drone shot, must have taken some doing in the early 80s to achieve, as the camera lifts so high we're able to watch K from a bird's eye view as he runs around the house's estate opening gates and jumping over walls.

And good luck forgetting the faces of Angst, in all of their grotesque close-up glory. 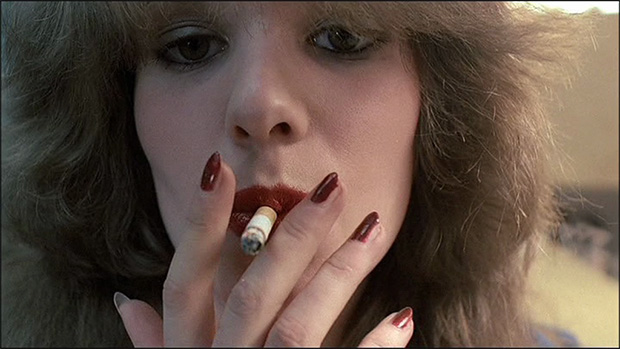 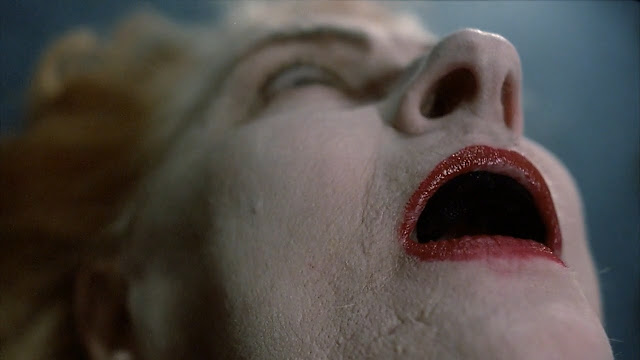 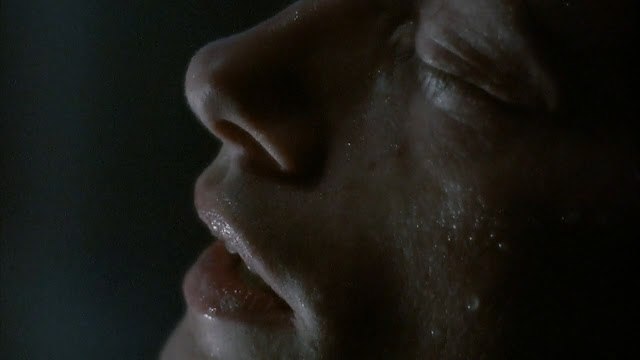 Every aspect of this film was a choice to provoke unease. Even the soundscapes are unnerving, with the score a repetitive synth march or a low-note dread-filled dirge, and normally innocuous noises such as footsteps and chewing food are blown up on the soundtrack to monstrous versions of the real thing.

Films that dwell so heavily on the viewpoint of a cold-blooded killer are always going to be for the strong of stomach, and the depths to which K sinks are matched only by the fact that we sink there too, in witnessing every painful second of it. If you want a truly soul-destroying double bill, Angst and Henry: Portrait of a Serial Killer would be a hell of a way to spend an evening. If the thought of taking stock of what you just participated in doesn't appeal, then maybe give this a hard pass.

Personally, as deeply grim as this film gets, I "enjoyed" it an awful lot for its full on commitment to making me feel so uncomfortable. Like Irreversible, it'll leave you with an empty feeling afterwards - but it's a beautifully constructed, frightening representation of the mind of a psychopath. It's a fucking travesty Kargl never made another movie. I cannot imagine the sights he would have shown us, if THIS was the first thing he had in his head.

On Shudder right now, and you'll get a content warning if you decide to watch it!
Posted by Zombie Cupcake at 23:12 No comments: