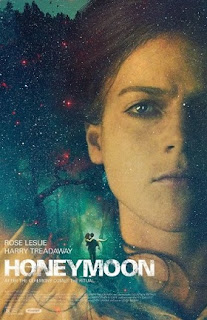 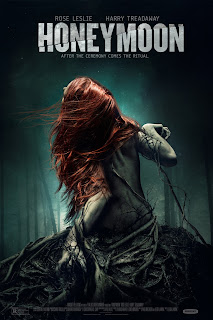 Both of these are for the same film, isn't that crazy? Look how much they vary, and give completely different ideas about what you're in for.

Equally, the tagline "After the ceremony, comes the ritual" is something I am sure someone in the marketing department was very proud of, but it too gives something of a false impression.

For what it's worth, I prefer the left poster. And now that I've seen the film, happen to think it suits it a whole lot more. Artwork choices for movies really fascinate me, I talked about them at the end of my review of Teeth, too, if you're interested.

Anyway, Honeymoon is an interesting little suspense film. Its concept isn't anything new: spouse finds partner doing something weird in the middle of the night; behaviour gets increasingly odd until finally the why is revealed. However, it carries itself well - though I will say if not for some icky scenes and a bit of bloodshed, it maybe falls closer to thriller than horror.

Bea (Rose Leslie) was my favourite thing about the film. She and husband Paul (Harry Treadaway - you may recognise him as Dr. Frankenstein from Penny Dreadful!) both start the film as you would imagine: happy, giggly, insatiable newlyweds. 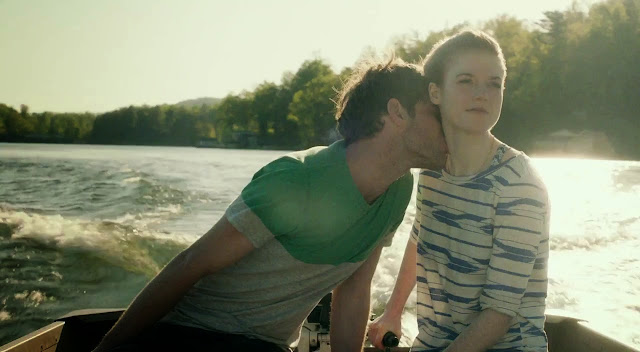 They have come to spend time at Bea's family cabin and all is right with the world... until it isn't. Of course, their journey throughout the film gradually erodes both of them, but it is Bea's transformation that I found most interesting. Hair and wardrobe help, of course, as her spark dims, then goes out completely... 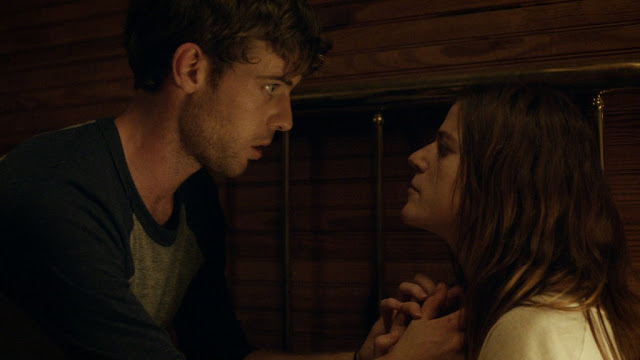 But Leslie is great at conveying this change, too. Her body language shifts from being open, loose and free, to guarded and curled inward. It really does appear that something awful has happened to her.

Bea quietly carries herself as a victim, but won't tell Paul why. What happened in the woods that night? What are those marks on her legs? She flat out denies anything is wrong, but is clearly not herself as she forgets certain words and how to do simple things, and acts uncharacteristically impulsively all of a sudden.

She also stops responding to when Paul wants to have sex. Now... I do understand where they were going with this... I get that they are just married and on their honeymoon, so the sex we see them have in the opening scenes establishes that they are a happily sexual couple...

The problem I had was Paul. Even after Bea has been acting increasingly odd, and something is clearly amiss, and her inner thighs seem sore... he continues to come on to her in a way that ultimately comes across as a power thing rather than a sex thing.

Thinking about this, and the act of writing of this review and has led me to the conclusion that we actually aren't meant to like Paul. Ultimately, all of the sympathy from the viewer is intended for Bea.

Honeymoon was written (co-written, along with Phil Graziadei) and directed by Leigh Janiak, and it's her directorial debut. It's an impressively strong film when you take that into consideration, and knowing the the writing and directing comes from a female perspective makes sense to me. 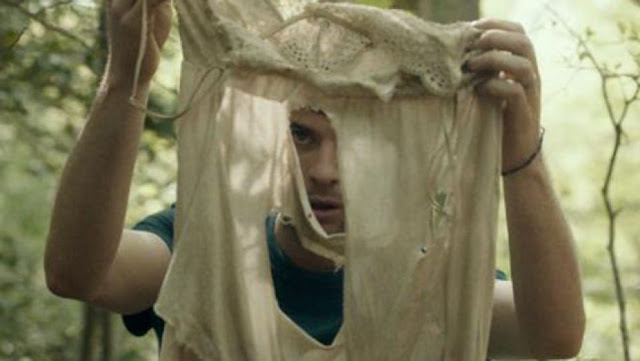 Paul may be the character we follow around more, the one we have most in common with (in that he's clueless as to what's happening and so are we...) but he's not a particularly nice guy when it comes down to it. I thought that was a rather interesting way to spin this strange little tale.
Posted by Zombie Cupcake at 20:04