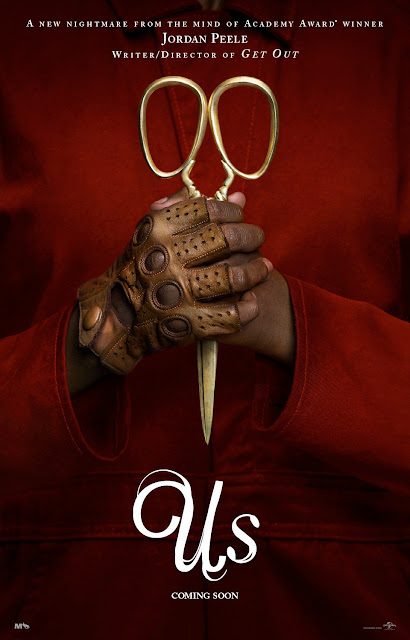 Hi! So I know I don't tend to review new stuff. This is because I feel a weird kind of self-imposed pressure for having an opinion that's somewhat topical...! Buuut I wanted to get some thoughts down about Us. This kind of starting writing itself without me making a conscious decision. So here we are :)


Okay firstly, let's talk about this fact from the IMDb trivia page:

This list does two things: reminds me that I need to see Dead Again, again, (it was a taped off the TV favourite of mine, back in the day) and it gives some clue as to the calibre of storytelling and overall atmosphere that Us was reaching for - and in my opinion, succeeds in capturing.

And honestly, those film choices simply make my horror/thriller nerd heart happy. Pun intended: Peele is clearly one of us. 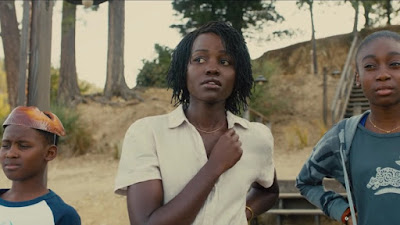 I'll say no more other than what's already out there with regards to plot: the Wilson family are on holiday when doppelgängers of themselves wearing red overalls invade their summer home, intent on forcing them to take part in some kind of ritual called "the untethering".

This film just kept turning down avenues I wasn't expecting and, as ever, that's truly the best way to experience it.

Worthy of mention though are the performances from the central four: Lupita Nyong'o as Adelaide, Winston Duke as dad Gabe, and Shahadi Wright Joseph and Evan Alex as their children, Zora and Jason. 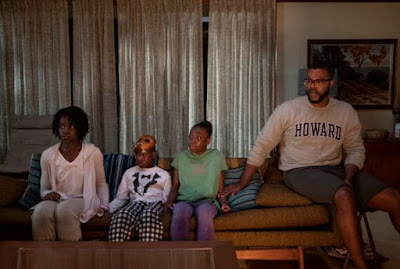 Instantaneously I believed in this family dynamic and all their superbly drawn little idiosyncrasies. From Winston's amusingly (and adorably) feckless father-figure, eliciting eye rolls; Wright Joseph's bored teen; Evan Alex as the "weird" little brother still into masks and magic tricks, and finally the force that is Nyong'o, whose performances are quite simply fantastic. 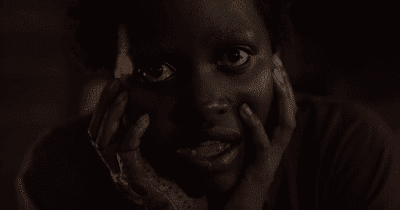 Elisabeth Moss and Tim Heidecker also star as the delightfully loathsome bougie family "friends", the Tylers. They have twin teen daughters, to further the doubling/doppelgänger weirdness. Moss doesn't have much to do, but that's fine; she has a tonne of fun as Kitty Tyler, a sloppy WASP who clearly can't stand her husband or kids. The later scenes with this family are a great blend of humour and violence. 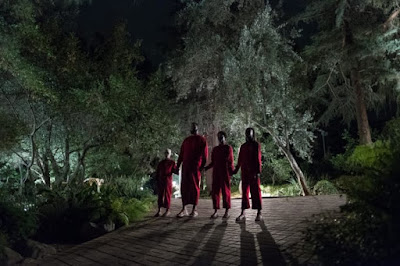 The more Us unfolded, the more I loved it. And yes, okay, I guessed a beat or two, but that didn't stop any of the gut-punch-like enjoyment as this peeled back to a story that is both brutally simple and simply brutal.

There's nothing like a shattering final shot in a horror movie, so enjoy this one while never being able to hear "Les Fleurs" the same way again.


Us is in theatres now and hopefully smashing records and expectations all over the place. I recommend you go and see it, and then go see it again ✄✄✄


Argh, there's so much I haven't covered here! Partly through fear of spoilers, plus the need to sit with some of the epic themes or see this film again to fully be able to process it all. I may do a follow-up post exploring things a bit more - or at least giving links to further reading from voices better placed to comment than mine.

Hours after watching this my head was still swimming with details and symbolism sinking in. I'm a huge sucker for twins/duality/mirror image themes in film, and I hope to learn of some articles, essays or podcasts about Us in that respect in the future. For now, here's what I couldn't stop thinking about. 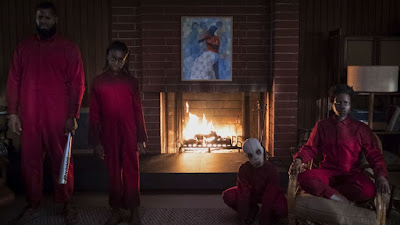 Let me know if you spotted any I missed! I've pretty much already decided we're going to see this again on its theatrical run. Repeated viewings are going to be a whole other journey.

As I'm sure most of us who saw the film have been, I am thinking about Us a lot lately. Once my review was done (such as it was 🤷) I wanted to dig into some others, and really get my teeth into the opinions and readings of the movie - especially from a) Black horror fans b) horror academics, and c) anyone with the ability to voice their thoughts in an eloquent and engaging way.

I realised my review (due to my wanting to make it mostly spoiler-free, and also because I was still processing it) didn't touch on any of the social commentary angles but in a way I'm good with this, because does the world need another white cishet reading of something like Us? I'd rather sit back and absorb from the a,b,c's above and share my favourites with you. So that's what I'm doing here.

Here's what I found:

There's also THIS list, which Peele himself retweeted.
Posted by Zombie Cupcake at 22:41