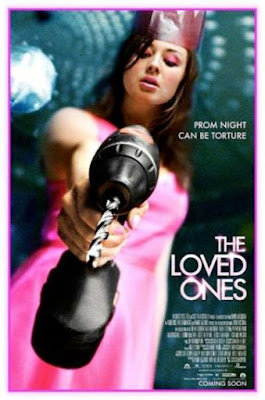 I emerge from an unplanned break from horror, and The Loved Ones wasn't a brilliant one to come back with, but here we are.

This is from the same guy as The Devil's Candy but this grubby little Australian flick did not give me anything approaching the heart eyes 😻 that Candy did, sadly.

Sitting here wondering how to start this review, I was reflecting on our introduction to Lola, the main character, and it only further highlighted to me how aggravatingly one-dimensional she is. Robin McLeavy certain commits as this nightmare in a pink prom gown and Lola is never ever shown as anything other than delusional and psychopathic. Even when she appears by the locker of her crush Brent (Xavier Samuel), she's wide-eyed and manic. Always heightened, turned up to 11. That ended up being my main problem with The Loved Ones. Lola is annoying as shit, so I spent most of the time irritated and waiting for her to die - and even the death scene was annoying, too! More on that later.

There are two "dates" happening throughout this movie. Lola with a kidnapped Brent, and Brent's friend Jamie (Richard Wilson) with a sexy goth girl. This secondary story is ultimately revealed to be a tenuous (at best) link to the kidnapping and torture, and if its purpose was to serve as light relief or a way to break the tension of Brent's apparently hopeless situation, it doesn't really work. There's even a moment where we're led to believe the stories are about to interestingly converge... but it's a fake out. Thanks? 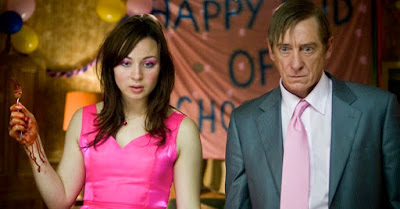 It's hard to imagine Lola existing in the real world well enough to successfully attend school and socialise, but we're shown that throughout her life, with the help of her father (who harbours incestuousness feelings for her) she's lived a cycle of crushes and rejection, followed by capture and torture in the name of her obsession.

Drills, forks, knives, syringes of bleach, a hidden pit under the kitchen; it's all here. Yet, I wasn't enjoying this ride.

When the moment finally came to see her die, she's treated like horror royalty in a Big Moment where time slows down. She watches her death approach, and we watch her watching. It goes on for-ev-er. This kind of end is fit for someone way more iconic and giving her this, when the writing and action have done nothing to flesh her out feels unwarranted and unearned.

The Loved Ones is streaming on Shudder at time of writing. Have I just woken up grumpy from my hiatus?!
Posted by Zombie Cupcake at 18:02